The New York Times has created the world’s fastest scissors, rock, paper player. A computer that draws on the memory of 200,000 games and analyses your most likely move based on patterns. I took a stab, and 200+ games later I declared the computer the winner. I reckon it’s slightly harder than the games in the Alex (the) Kidd games. I thought the “the” was their – but not according to Dr. Google.

“Computers mimic human reasoning by building on simple rules and statistical averages. Test your strategy against the computer in this rock-paper-scissors game illustrating basic artificial intelligence. Choose from two different modes: novice, where the computer learns to play from scratch, and veteran, where the computer pits over 200,000 rounds of previous experience against you.”

I tried thinking really hard about the best possible move and picking the opposite. I tried picking the same move ten times in a row and then changing it (I won that one, but lost the nine before that). 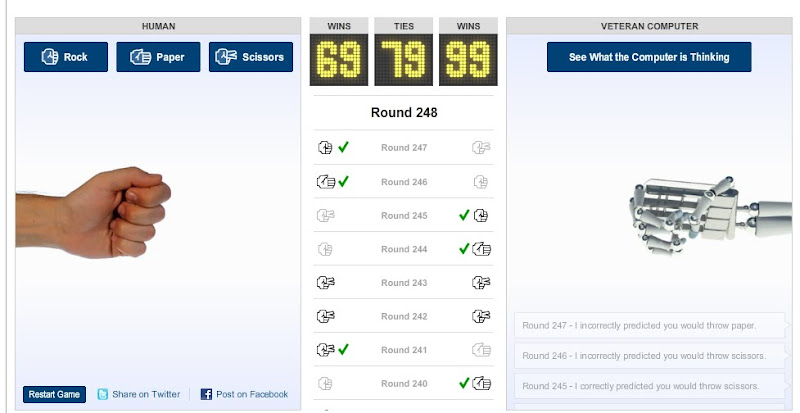 What are your strategies? With real people I like to call my moves in advance just to get people doublethinking. Then, if they think I’m trustworthy, they win the game, but I win the game of life. And if they don’t – I win both. It’s win/win.

I wonder if asking people what they call the game (ie the order they frame the three options in) is indicative of a person’s stock throw? Maybe it’s the one they put in the middle. I’m definitely a rock guy. Mainly because in my family a win came with the opportunity to physically demonstrate the action of the winning item. And a rock is more fun to dish out than scissors.

According to GenderAnalyzer my blog is written by a man. You probably knew that already. I guess my predilection for…

This “Subservient Chicken” will do just about anything you ask it to. Provided you use words that can be generally…

Just build this glove. Stick it on your hand. And Bob, as they say, is your uncle. The glove will…