This post from Crikey about how Christ doesn’t belong in Christmas, and Australian children don’t want him there didn’t make me angry. Which I suspect is the response it was meant to elicit from Christians like me. It made me sad. It made me worry for this generation of Australians, who, like the generations before them – especially their parents – have grown up thinking that everything revolves around them.

The “keep Christ in Christmas” debate kind of irks me too. It smacks of the sort of culture of nominalism that leads to all sorts of political stupidity – where we assume that calling Christmas “Christmas” is a measure of following the Lord Jesus, and that somehow we’re a Christian nation because we head along to church annually to pay our dues. 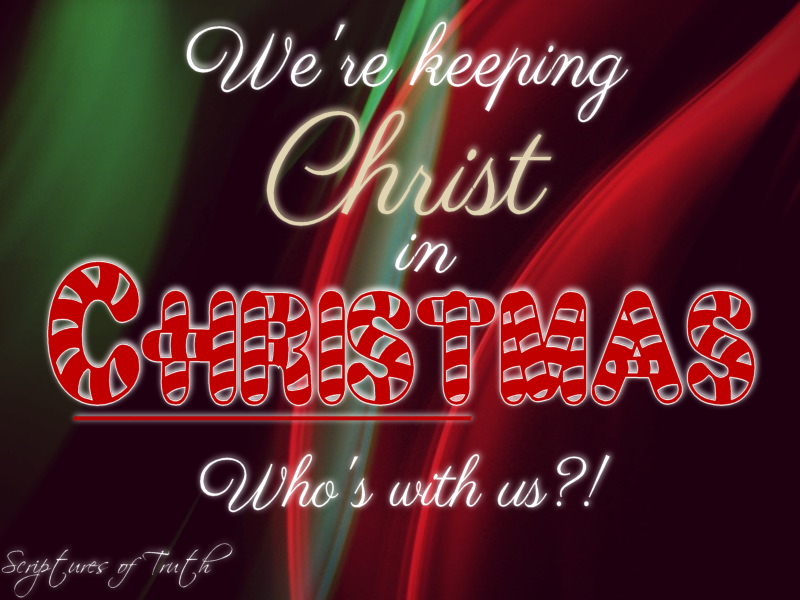 Image: This was one of the tackiest of these I could find…

And these guys have a point…

But I do think that we do our kids an educational disservice if we sanitise Christmas for the sake of any political agenda.

I’m not suggesting that Christianity should be taught in the class room outside of opt-in Religious Education/Instruction. I’d hate my kids minds to be warped by some weird theology, and I’d much rather they be taught just the facts, or better – taught how to separate fact from fiction, with a good appreciation of how culture has developed to the point we’re at now.

But the fact is that our society, modern Australia, has been incredibly influenced by Christians, and by historical events that have shaped us and our values. Including the life and teaching of Jesus, and the growth and expansion of the church.

Even if you don’t believe that Jesus represented something incredible. The incarnation. God made flesh. He, and his, have modelled a life lived in sacrifice for others, seeing others as more important than themselves.

It seems a shame to whitewash that out of the system for the sake of demonstrating that we’re above culture wars, and for the sake of feeding and perpetuating a system that is hell bent on economic growth at all costs – including through rampant individualism that is based almost entirely on the question of what one consumes or purchases (or doesn’t consume, or purchase).

It’s terrible that the wonder of the incarnation is dismissed as:

“…imposed by religious instruction volunteers who lurk around primary schools in the lead-up to Christmas in the hope of relating their version of the miraculous birth to impressionable children.”

Way to make volunteering sound like something sinister. That really boosted the tone of this piece.

Here are some of the sadder quotes.

“The grade five pupil in question reported that all her classmates participated in Christmas activities with enthusiasm: “We love making Christmas cards for each other, and we especially love decorating the classroom Christmas tree.”

That’s nice. I guess. Making cards for each other – cards that come at no cost. That’s what Christmas is about.

What kind of decoration did you and your classmates make? “Well, we made pencil cases, hand-sewn purses, cardboard-cut outs of our favourite pop stars, favourite song lyrics … one boy even dressed up the angel at the top of the tree in the colours of his footy team.”

Yes. We need to celebrate the things we love – our heroes. Our idols. The things that make us feel good. That’s what Christmas is about. Those are good Australian values.

“It occurred to me this is Christmas for her and many kids of her generation. This is how Christmas was celebrated at her kindergarten, her primary school, in the broader community and, more or less, at home.”

“Most parents I spoke to seem to be fairly relaxed with the idea of their children participating in school-based Christmas activities, particularly when end-of-year primary school festivities have been stripped of scripture and overt religious symbolism.

According to my neighbour, a primary school teacher, “we seek to involve all the kids by making no reference to God, the miraculous birth, heaven, or anything that’s sacred”.”

You can’t unhave your cake, and not eat it too. You can’t really have a secular celebration, in an educational institution, and not talk about where the celebration originated.

That’s not education. You can’t ignore the fact that both parts of the name, even if you sanitise the events “Christ” and “Mass” are inherently religious in nature.

Even if you dismiss the claims inherent in the name “Christ” – surely you can objectively discuss that what the authors of the historical documents that we call “Gospels” (pieces of biographical royal propaganda that are amazing insights into first century culture of huge educational value) were claiming.

They’re claiming that Jesus is the fulfilment of a pretty amazing string of expectations kept alive through a Jewish people who had been oppressed, displaced, returned, and oppressed by the regional superpowers.

You could discuss the impact that these claims have had on history – how they changed the direction of the Roman empire, and potentially brought it to its political knees, because they valued sacrifice, service, and love for others. And that would be of more educational benefit than a Christmas circus featuring “a clown, juggler, acrobat or magician.”

What beneficial stuff does a kid learn from those roles that they won’t get from elsewhere in the curriculum? I’m not against kids having fun, developing social skills, and learning some self-esteem while they’re at school – but surely they can develop mad juggling skillz at home, and not on the tax payer’s dollar… Or, at a pinch, the P.E curriculum could expand to include a little clowning maybe in cahoots with the drama department… Interdisciplinary skills are good to. What I am sure of is that they have nothing to do with Christmas – secular or sacred.

Now, it’s a time to rest, reflect, spend time with family & friends, stop working, go to the beach, eat a lot, give presents, share a meal, celebrate family, friends and life. Importantly, it’s an opportunity to do that at the same time everyone else is doing it, because despite Thatcher’s dire predictions there is still a thing called society.

But what sort of society does this celebration produce? When we’re all being selfish at the same time. I’ve never heard so many adult tantrums, or arguments, in the local shopping centre as I have in the last few days.

Why not get rid of the inane secular celebrations and do what schools are meant to do – educate? Why not spend some time looking at the history of Christmas, from the manger, to the pagan festivals that Christianity took over as it expanded? To the rise, and fall, and rise of celebrations of the Christ Mass – including puritanical attempts to ban Christmas? Why not look at what “the Christmas spirit” has been historically, not so much about satisfying our desires, but things that embody the guy whose birthday it is?

I’d love kids to learn about the true wonder of Christmas. But school’s not the place for that. Not in our time, or country, and certainly not in a public system. I’m fine with the secular cause – provided it continues to allow some space for parents to elect for their children to receive education about religions from people who practice them.

I’m confident that the Christmas story – of God made flesh, coming to his own world to sacrificially swap his place for ours, and bring us peace with the Father – is the best and most appealing story – more appealing than seeing the angel on top of the tree dressed in the maroon and white of my beloved Sea Eagles. So my motives aren’t completely pure – I do think that people thinking about Christmas, and what it’s about, will possibly lead to them meeting the Jesus who was born, for real, in history. Who grew up, died, and was raised. Who claimed to be the promised king of the Old Testament, who would mend our broken world – through sacrifice.

But these motives aside, what we’ve got now, if the Crikey piece is accurate, is a poor imitation, of little to no educational value. Surely our country would be a better place if our kids took a little bit of time to get informed about what Christmas is, and why it has endured. If it was less about us, and more about others.

This can happen without threatening the provision of a robust, secular, education to every child. Suggesting that a secular education requires no mention or treatment of the sacred leaves a pretty gaping cultural/sociological hole to be filled when it comes to why the world is the way it is.

Mmm, minimalism is the new black. I was tossing up using the word antidisestablishmentarianism in today’s heading – and it…

Summer, Autumn and Winter say hi. Spring is going through a rough stage of cantankerous adolescence and refuses to contribute…