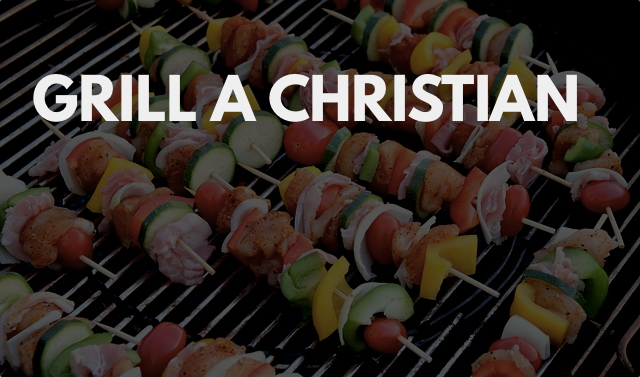 Do you have any questions you’ve been super keen to ask a Christian? Any question? But never known who to ask, or how to ask it without someone not taking it seriously? Send them my way.

I’d love to have a crack at answering them. In this little “Grill A Christian” thing, I’m going to take a stab at answering some questions that a few people newish to thinking about God have asked me, but I’m open to answering more. Maybe it’ll help you believe something, maybe it’ll help you understand why or how people can believe in something that seems like a fairy tale or an exercise of the imagination to you… Who knows.

I’ve been thinking lately about how much I can no longer really describe in accurate terms what I thought when I became a Christian (In a nutshell: I was a kid, I grew up being taught about Jesus, and at some point I decided I owned it. Then I started questioning the beliefs I had as a child, then I came up with answers to those questions that satisfied my adult brain, while looking at better stories that account for our humanity and our world). I can, however, describe in accurate terms what excites me about seeing the world through a Christian lens, and what excites me about the God revealed simultaneously in his word and in his world. I’ve often wondered how to reconcile the two — how the thinking that comes through probing and questioning as an adult might connect with someone just starting out on the journey. Is there anything I can say that isn’t the product of a massive gap that has been created by my own wanderings and musings?

Here is the working assumption that underpins this exercise, and, hopefully, my answers.

God is big, and our ability to understand him is small, and the process will take forever. Which is what we’ve got if we grab onto him as he shows himself in Jesus.

One of the profound truths I believe about God is that in order for him, an infinite ground of all being in the universe to make himself known to any finite creature in the universe he needs to step down to us. Finite creatures can’t touch the infinite, the infinite can reach down though. And that’s precisely how God works. Whatever we do as our appreciation of God grows with time, and by his Spirit, we need to be able to look backwards to where we came from, so that we too can reach back and grab people as they reach out for God. Plus. Christianity at its heart is a story that is both simple and rich. When Paul speaks to the leading religious philosophers and theologians of his day, the council of the Areopagus in Athens, he takes the small ideas of God they’re working with, and blows their mind. Paul is a guy who knows who God is from a lifetime of being schooled in the Old Testament, and, it seems, from having read Greek and Roman philosophy and poetry about gods. He replaces the small, human, finite, understanding they have of God with something much bigger. I think that’s our job as people searching for truth. Paul was being grilled — questioned — by this council. He went willingly into the breach to answer the questions of these smart guys, and this is what he said (and many of them laughed at him).

“The God who made the world and everything in it is the Lord of heaven and earth and does not live in temples built by human hands. And he is not served by human hands, as if he needed anything. Rather, he himself gives everyone life and breath and everything else. From one man he made all the nations, that they should inhabit the whole earth; and he marked out their appointed times in history and the boundaries of their lands. God did this so that they would seek him and perhaps reach out for him and find him, though he is not far from any one of us. ‘For in him we live and move and have our being.’ As some of your own poets have said, ‘We are his offspring.’

“Therefore since we are God’s offspring, we should not think that the divine being is like gold or silver or stone—an image made by human design and skill. In the past God overlooked such ignorance, but now he commands all people everywhere to repent. For he has set a day when he will judge the world with justice by the man he has appointed.He has given proof of this to everyone by raising him from the dead.” — Acts 17:24-31

The thing is, while all this talk of infinity might blow our minds… You don’t need a sophisticated faith, you don’t need to grasp the ungraspable. You need to grasp that moment in history where God became finite, and knowable. There is no God in the universe who is not exactly like the crucified Jesus. That is God in his majesty and love on display. That is his invisible qualities and character revealed. It’s the pinnacle of God’s creative work, and our destructive work, on display. The thing God says about what the whole world is meant to do as we understand more of it (like via science or history), is true, perhaps truest for that moment in history where he stepped into the creation and revealed himself in the most profound way.

For since the creation of the world God’s invisible qualities—his eternal power and divine nature—have been clearly seen, being understood from what has been made, so that people are without excuse. — Romans 1:20

Jesus takes those invisible qualities and makes them visible. The Gospel is the story of God making the unknowable, the invisible and infinite, knowable in the visible and finite person of Jesus. This is the story the world was built to tell, or to host, as God’s revealing canvas for his act of self-revealing in Jesus.

The Son is the image of the invisible God, the firstborn over all creation.  For in him all things were created: things in heaven and on earth, visible and invisible, whether thrones or powers or rulers or authorities; all things have been created through him and for him. He is before all things, and in him all things hold together. And he is the head of the body, the church; he is the beginning and the firstborn from among the dead, so that in everything he might have the supremacy. For God was pleased to have all his fullnessdwell in him,  and through him to reconcile to himself all things, whether things on earth or things in heaven, by making peace through his blood, shed on the cross. — Colossians 1:20

You don’t need to grasp anything else to ‘get God’…  you need to come running to the God who reaches down with the excitement of a child. I love this picture from Paul, in 1 Corinthians 13, of love and reaching for knowledge being two sides of the same coin, but being something that starts when we ‘think like a child’… there’s a richness that comes from staring at the same truth for a long time. A richness I hope to keep cultivating for eternity. Like a farmer who keeps investing gleanings and stubble back into the earth to create richer soil, and thus, better fruit. What we look forward to is our picture of the God we know in our infancy, or as we meet him for the first time, becoming more and more complete, in this process that stretches infinitely into the future.

For we know in part and we prophesy in part, but when completeness comes, what is in part disappears. When I was a child, I talked like a child, I thought like a child, I reasoned like a child. When I became a man, I put the ways of childhood behind me. For now we see only a reflection as in a mirror; then we shall see face to face. Now I know in part; then I shall know fully, even as I am fully known.

And now these three remain: faith, hope and love. But the greatest of these is love. — 1 Corinthians 13:9-13

Which all brings me to this new thing I’ll post here from time to time. One of the fun parts of being a pastor, and a Christian who is quite public about their faith online, is that I get questions from people. I love questions. Often I’ve just answered a person, and later thought “wow, that answer might be useful to store somewhere”… well. No longer. Now I’m, with the permission of the questioners, going to start sharing questions and answers from people so I don’t lose them, and in case others are asking similar questions.

You can ask questions too! Grill me. No doubt some of my answers will be wrong, heretical, or stupid. That’s part of the process of working towards truth. So feel free to join in the discussion by providing your own answers…

I’ll post up the first question tomorrow, and go from there.

I’m finding all sorts of fun quotes playing around with primary sources. Here’s a quote from Aristotle’s Rhetoric about use…

Did you hear the one about the Cardinal and the Evolutionary biologist? Or at least watch Australia’s highest ranking Catholic,…