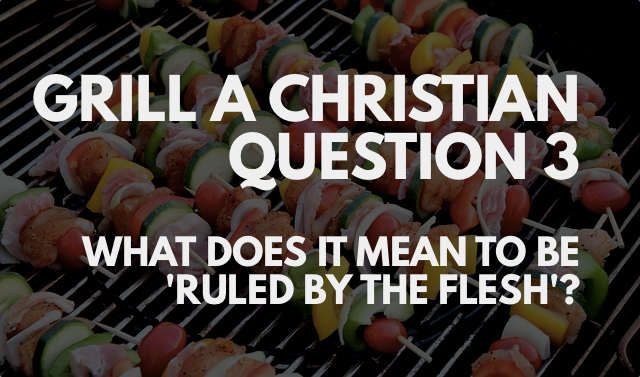 Question: What does it mean in Romans ‘governed by flesh’?

What Paul means is basically that our natural humanity, from birth, is caught between two poles that are in conflict with themselves.

The first is that we’re made in the Image of God, and so know what we ought to do, and sometimes do it, the second is that our humanity, our ‘flesh’ has been corrupted by humanity’s rejection of God’s image and desire to craft our own images, or ourselves as images of our own God (sometimes we just want to be God).

So our two natures — or these two aspects of our nature are sort of playing out, in different proportions, in everything we do. As humans, but we’re also always progressing towards being completely consistent based on what we worship — if we become worshippers of the Living God, as we see him revealed in Jesus, Paul says we are ultimately transformed into the image of his son, if, instead of God, we do what Paul talks about in chapter 1  — worshipping created things that can’t bring life — idolatry, which leads to all sorts of bad actions (sin) — we transform into dead people. Our flesh, without God, points us towards death, because often we put ourselves in the centre and worship ourselves. You could say every person ends up with this happening, we all become shaped by the ‘image of God’ we pursue, the question is whether it’s the real God, or a god we make up.

So, whatever we are, before this transformation is complete, is a product of these aspects of our humanity. The good stuff we do is often from mixed motives, like, “maybe someone will notice what a good thing I’m doing” or “aren’t I better than that other person who couldn’t be bothered doing this” — for Paul it’s convenient to describe this as a flesh v Spirit thing, because what he looks forward to is these two parts of our nature being perfectly aligned, rather than in conflict.

The other thing in Romans is that part of the process of becoming like Jesus — our picture of the real God, is that we get a third part to our humanity, a greater part, God dwelling in us, completing us, by his Spirit. This isn’t like a magical thing you feel, it plays out in a reorienting of our lives so that we do Christlike things more over time. We see the Spirit by its fruit — the lives we live reflect the transformation brought about by whatever we’re worshipping. But as a result of the new bit of our humanity, the Holy Spirit, that happens when we follow Jesus, we re-orient our lives both back towards the image of God part that was always part of us, and now also to the image of Jesus, which has become the pattern for future us both in terms of how we live and our eternal connection to God, our ‘fleshy’ lives change too, hopefully, over time and towards eternity, our actions are less and less mixed motived and more and more an outworking of this transformation, but that never fully happens until heaven. I always feel a little bit like this sounds like science fiction, but the ultimate post death reality, if Jesus really was raised from the dead is that we are raised with new ‘flesh’ untarnished by our shared disobedience.

So governed by the flesh, to answer your question, is a description of us putting the ‘not image of God’ part of ourselves in charge at the expense of our image of God part. It’s about us choosing to live how we want while suppressing whatever quiet voice (and as you suppress it it becomes quieter) is in the back of our head saying ‘you were made for more, you were made for better than this’…

The Amazing Joel Hockey Movement is a Christian Comedy Folk band/singer. I thought he was funny when I was in…

You might be thinking, on the basis of the title, that I’m going to talk about politics. If you want…

Craig linked to this story about Australian’s being the most sinful people in the world. I thought it was interesting.…