The lobby group who cried wolf: An analogy, or parable, to explain why analogies pointing to heinous and dark points in our history might be true, but don’t really work in moral debate 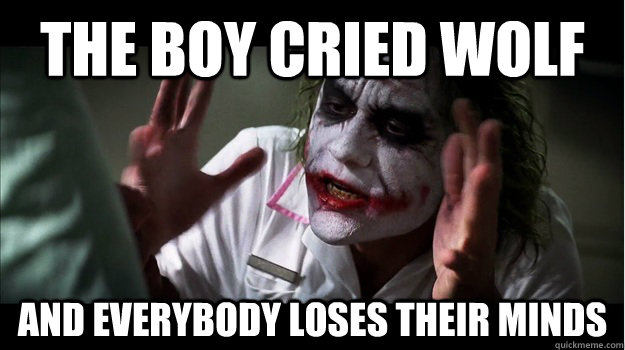 There was a shepherd boy. A gatekeeper. He had a flock of sheep that he looked after and he tried to look after them very well indeed. There were often other sheep wandering near his pen, and he would gaze longingly at them wishing that those sheep would become part of his flock. There were many sheep out there who appeared to have no shepherd at all, but they actually belonged to the nearby town. The town, unable to really agree on how sheep should be sheltered, was trying to live without shepherds. They were making decisions by having adult conversations where a variety of voices were invited to the table. Shouty voices that didn’t listen to others tended to be ignored, but sometimes they held sway because no compelling alternative view was put forward.

One day. This sheep saw a couple of dark, furry, ears pop up on the horizon. They sure looked wolf-like.

“Hmm. He thought to himself. This is an opportunity for me to make my case for the role of the shepherd.”

And then he saw some teeth. He remembered once seeing the damage a wolf had done to a stray sheep. He knew that the people of the village were also terrified of wolves and what they did to sheep. He thought this might be an opportunity to get a few of the sheep outside the pen to join his flock, or at least for people to recognise his role as a shepherd. The thing is, he knew this was a dog that belonged to one of the townspeople. That this particular townsperson believed the dog was the best way to look after the sheep, so much that he’d even opined about the possibility of getting rid of the town’s common sheep altogether, and just getting dogs. It’s fair to say that the shepherd didn’t like this idea, and he didn’t love the idea of a bunch of wolf like creatures hanging around near his poor defenceless sheep.

The shepherd, despite knowing full well that this wasn’t a real wolf,* and knowing that the town would see through his ruse eventually, believed the town would recognise the damage a wolf might cause and see the connection in the maw of this black dog ran into the town crying “WOLF! WOLF! WOLF!” He interrupted a town council meeting where some reasonable voices had already been arguing that sheep need shepherds, and that dogs with wolf like tendencies also had a place in the town but the future of the town probably depended on everybody figuring out how to live together, despite and through disagreement. Just as they always had.

The thing is. The boy had tried this trick before. Many times. And when people realised that it was a dog, not the wolf who had previously caused such horrific damage to both sheep and dogs, they didn’t just stop listening to the shepherd. Some made plans to release the sheep from the shepherd’s pen. Others became even louder in their calling for dogs, who might better fight off wolves if they ever arrived, or indeed, keep the wolf from the door. Others simply wanted to exclude those in favour of the ancient art of shepherding from the table.

Everyone in the town has a concern for the safety of the sheep. Some might even want sheep to dress as dogs. Ultimately the town will decide the best way to do this, especially for the sheep in the commons, and they might listen to shepherds who speak out of concern for their sheep so long as they don’t keep raising the spectre of a sharp-toothed wolf wanting to devour everybody. Dogs might serve their place in keeping wolves at bay, and other sheep, outside the shepherd’s flock, safe (though not as safe as they’d be with a shepherd, and perhaps the shepherd’s job might be to ask that every sheep should be free to choose that safety, and to model that safety and love well).

See. The problem with this shepherd in this story is that he’s actually forgotten what shepherding is all about. And what is attractive to sheep. It’s not so much that they offer protection from wolves. It’s that they offer protection from wolves by facing them directly, not running to the town to get the town council to do their work for them out of fear. The shepherd had forgotten the ultimate lesson in shepherding; the lesson from the ultimate shepherd. The shepherd had also, in a way, or at least as it appears, become more worried about preserving the role of the shepherd than protecting the sheep.

The shepherd’s job is not to protect the dignity of the office of shepherd by comparing it to the wolf, or the dog, or comparing dogs to wolves. The comparison should be so obvious it doesn’t have to be made. It’s to inspire others to become shepherds because they see how great and virtuous this sort of sacrificial love is. This love also helps the sheep feel at home and secure with the shepherd. This shepherd has lost his way. He’s lost the art of shepherding. He’s lost the real pattern of the ultimate shepherd through some transmission loss, but also because he’s seen how effective some of the louder more powerful voices in the town are at getting their way. This analogical shepherd share’s the goals of the ultimate shepherd, but has lost his method. He’s decided to cry WOLF! Rather than facing the wolves at the cost of himself. In doing so, he is at risk of just being a hired hand, and not a shepherd. A real shepherd has skin in the game in such a way that the real wolves, and the dogs, bite the shepherd and not the sheep, or when the sheep get bitten because they wander off, he’s there to save them and patch them up. The ultimate shepherd dies for his sheep.

“I am the good shepherd; I know my sheep and my sheep know me— just as the Father knows me and I know the Father—and I lay down my life for the sheep. I have other sheep that are not of this sheep pen. I must bring them also. They too will listen to my voice, and there shall be one flock and one shepherd.” — Jesus, the ultimate shepherd, in John 10:11-16

*There are real wolves. The holocaust and the stolen generation are good evidence for this, and might be times when shepherds failed, where shepherds became allies with the wolves, or were eaten first and nobody listened. The town should probably be made aware somehow when a real wolf comes. And this is one point where this analogy falls down, which kind of proves the point that analogies are terrible. And sometimes dogs become wolf like and attack sheep. But the shepherd needs to have skin in the game in these situations and be able to show the tooth marks if he’s going to be taken seriously as a wolf-fighter.

Post script. In case the analogy breaks down. This is me, by analogy, arguing that making an analogy to something really terrible like the holocaust or stolen generation is a dangerous, high risk, game and the ACL should stop playing it because it is stopping other ‘shepherds’ being able to protect our sheep. Analogies and comparisons are fraught. I am, for the record, comparing the ACL to the boy who cried wolf, but also suggesting that in losing Jesus and his example they are playing as the “Hired help” not the shepherds.