“Those who hate the truth must censor” — Martyn Iles

I’m still trying to navigate that tension of not being sucked into the culture war vortex that some Christian leaders from the hard right want to call us into (and look, I suspect there’s some bias in this Fairfax report about a recent conference here in Brisbane, but probably not that much…), but also calling such leaders who claim to represent Christ to account. Not because I think this is my job in particular — but if a group is going to claim to represent Christians, then I do think they should be prepared to listen to their constituency; and the nature of lots of these movements is that they are a law unto themselves and disconnected from institutions who provide accountability and discipline (so, for example, if I’m out of line, you’re welcome to take that up with the Presbyterian Church, who I am accountable to for my words and actions).

So while I’m trying to avoid ungodly and combative interactions with the likes of Martyn Iles and Lyle Shelton on social media, I do see a whole lot of other leaders in the church sit idly by, and talk to many of them in private about shared concerns about the direction these men and their organisations are pulling the church, or at least the public perception of Christians.

So last night when Martyn Iles posted a long (by his standards) rant about the irreverence of just referring to Jesus by his name, Jesus, rather than a host of divine titles also due to him as Lord and Christ, I responded. I suggested he might go to a theological institution and get some training before putting himself in the position of teacher and judge. Accountability is a good thing after all; so is expertise. Then I tagged a prominent Christian social commentator and historian asking for his talks, and that commentator responded by pointing out that young Martyn’s hypothesis seemed misguided when weighed up in the Gospels.

This is the same Martyn Iles who hates cancel culture and who just recently posted this about censorship: 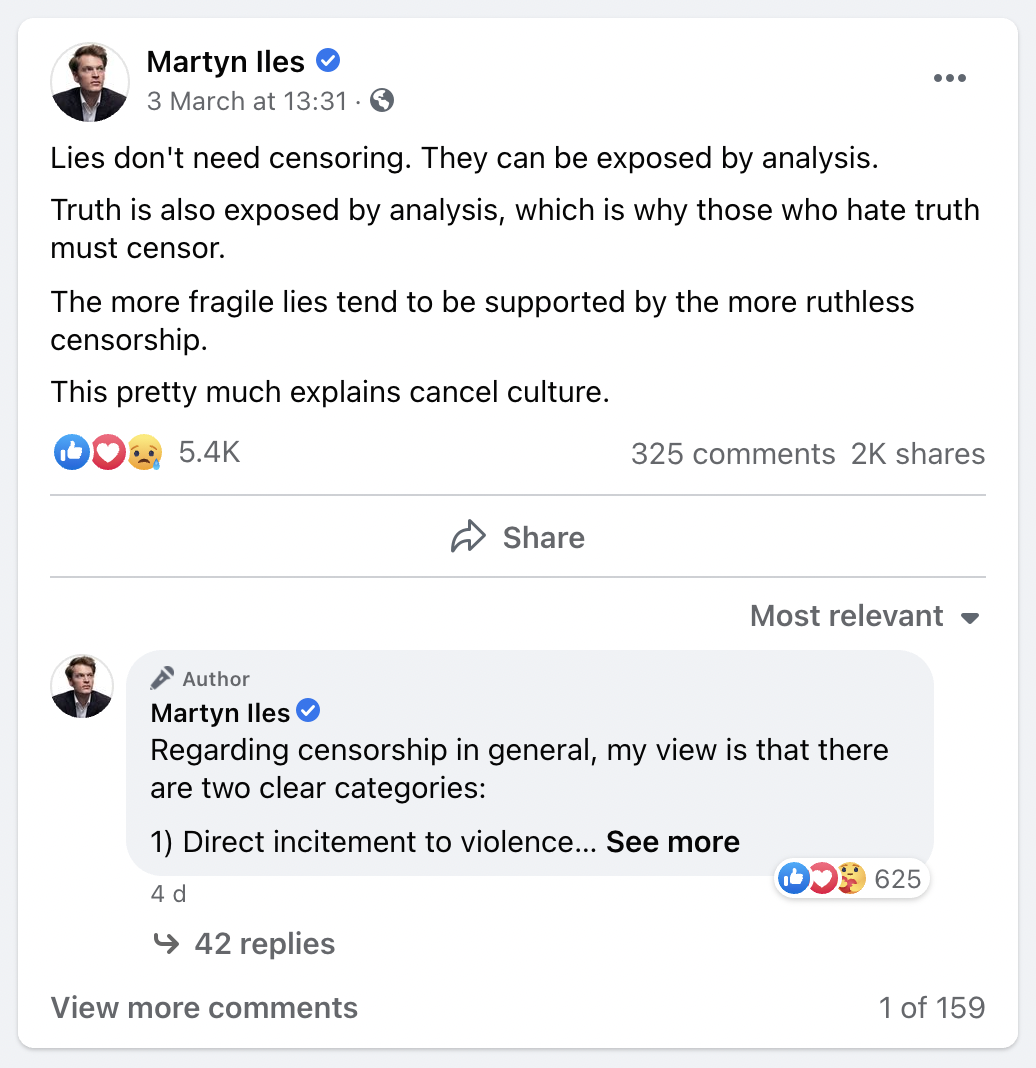 But now, dear reader, after some very mediocre analysis of Martyn’s truth claim; analysis made public, but counter to the view Martyn would have his readers hear, my comments have been censored (removed) — and my ability to comment on Martyn’s wall has been revoked. Or one might say I’ve been “cancelled”…

Now. I’m not a victim here. I am not playing the victim card by making this observation. I’m sure Martyn and whoever gets roped in to run his socials sees my contributions as generally against the mission of the organisation or platform, and I have plenty of platforms where I can exercise my own free speech, and speak both my own mind, legitimate criticism of Martyn and the ACL and the direction they seek to take the church, and even against this sort of censorship. I have plenty of privilege and this isn’t, ultimately, a restriction of my voice. It’s not like Martyn’s wall is a news service (he and the ACL kept posting things through Facebook’s news ban).

I’m also known to block people infrequently on social media, for my own headspace, and, because, at some point I am not obliged to provide a platform for views I don’t agree with. I’m really reluctant to do this, and so comment threads on things I write can get messy and ugly (especially on Facebook). I am not a ‘public square’ — my Facebook presence is a private square that I, in various ways, rent from Facebook (by providing content and getting people to spend time on their site), and my blog is utterly ‘privately owned’ — it receives no funding beyond the dollars I pour into keeping it running. How I choose to use this space, or my ‘rented’ space on Facebook, is up to me as host. That’s fine.

People not wanting to respect the ‘house rules’ is a thing that makes me think more censorship would be a good thing, not to prevent analysis, but because hospitality might sometimes require kicking out guests who want to make everyone else feel unwelcome. This is a thing called the ‘paradox of tolerance’ — and I tend not to pull that lever to censor ideas, but rather to protect relationships.

But it does strike me as interesting. The people who bang on about censorship and cancel culture are so quick to employ it.

And there’s a silver lining here — because I spent most of my morning chatting to people who’d only come across Martyn’s stuff on Facebook because I couldn’t help but comment on it… And now. Well.

It seems that these days everyone’s a critic. I decided to post the following bits of criticisim from Mel and…

Apparently some students from Washington State University were less than happy having their accidental emails to yours truly posted online.…

Finance and Deregulation Minister Lindsay Tanner is Web 2.0 enabled with a blog over at the SMH. Today’s post is…

1 thought on “Cancelled (by Martyn)”