Apparently breast cancer awareness week is a movable feast. It happens whenever somebody decides that Facebook hasn’t had enough “awareness raising”… this time round it’s not quite as innuendo laden as the last few years. Women are being asked to put a vegetable as their status.

This one is pretty dumb, so it hasn’t caught on with the same gusto that the others have…

But, in case you’re wondering, this is what they mean.

Blueberry: I’m single
Pineapple its complicated
Raspberry: Im a touch and go woman
Apple: Engaged
Cherry: In a relationship
Cucumber: I just had sex!
Banana: Im married
Avocado: Im the “other one”
Strawberry: Cant find the right one
Lemon: Wish i was single
Grape: wants to get married.

How this relates to breast cancer is just completely beyond me. I think people just want to launch a meme, so they tack a popular cause onto it, say “this is a secret, don’t tell any men” and then release it into the wild.

I’ve made my opinion on this kind of “awareness raising” pretty clear previously, at least this one is relatively free of gutter level innuendo, but please. Just stop. It was funny (almost) once, it was hackneyed the second time, and now it’s just ridiculous. Why don’t we try just talking openly and honestly about breast cancer rather than copy and pasting for a cause or engaging in this “lets not talk about the elephant in the room” style of drumming up awareness for your cause. 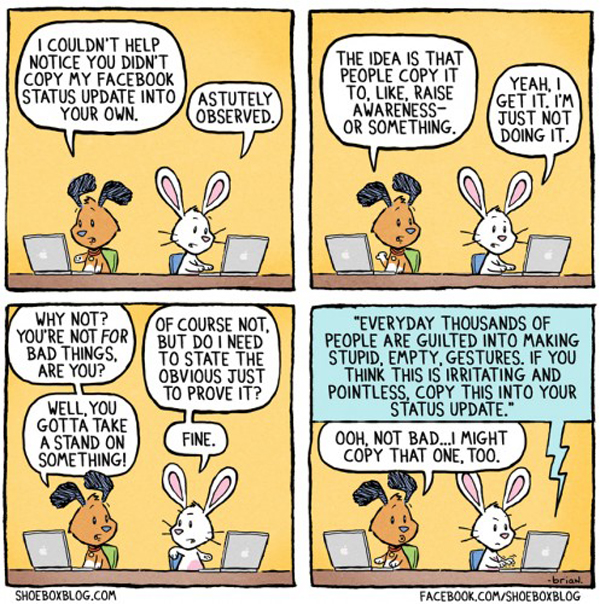 Gary posted this the other day, it also goes nicely with my rant the other day about annoying status updates.

All publicity might be good publicity. But publicity is not created equal. And if you think telling me where you leave your purse when you get home in some sort of innuendo laced update on a social media platform I’m going to have the following reactions:

a) feel mildly uncomfortable.
b) think “what is going on here”
c) google the repeated phrase.
d) go “oh, that’s stupid.”
e) not think positively about your cause.
f) not donate.

There’s a world of difference between good awareness raising – where the campaign is linked with the cause in the public consciousness (like Jeans for Genes Day and even Movember), and campaigns based on being cryptic and excluding people not in the know.

Awareness as the “ends” of a campaign is ridiculous. Awareness is a means to an ends in PR. Campaigns should push people towards the end, not just stop at people being “aware.” What good is being “aware” of breast cancer? It’s not much good for the sufferers, or for those who are genetically predisposed to suffering.

See Stuff White People Like for a more biting summary of this problem than I am able to produce. Basically raising awareness is the stuff people do when they are not interested in actually doing something.

“An interesting fact about white people is that they firmly believe that all of the world’s problems can be solved through “awareness.” Meaning the process of making other people aware of problems, and then magically someone else like the government will fix it.

This belief allows them to feel that sweet self-satisfaction without actually having to solve anything or face any difficult challenges. Because, the only challenge of raising awareness is people not being aware. In a worst case scenario, if you fail someone doesn’t know about the problem. End of story.”

This campaign is as dumb as the bra colour one from January. I saw it defended, when a friend dared to question it, as “awareness raising” which is the window dressing of real action.

Newsflash: Everybody is aware of breast cancer, most people have lost a friend or loved one, or know somebody who has. If you have the public profile of breast cancer you can actually just ask people for money. Set a funding target. Go for it. Have a telephon (is that how you spell the fundraising thing done by the telephone?).

“About a year ago, we played the game about what color bra you were wearing at the moment? The purpose was to increase awareness of October Breast Cancer Awareness month. It was a tremendous success and we had men wondering for days what was with the colors and it made it to the news. This year’s game has to do with your handbag/purse, where we put our handbag the moment we get home for example “I like it on the couch”, “kitchen counter”, “the dresser” well u get the idea. Just put your answer as your status with nothing more than that and cut n paste this message and forward to all your FB female friends to their inbox. It doesn’t have to be suggestive. The bra game made it to the news. Let’s see how powerful we women really are!!!”

Let’s see how powerful we women really are? I’m sorry. If the “power of women” is using Facebook to get on the news then somebody tell our Jules, or Hillary Clinton, or any other successful woman. Most of the PR industry are women, if power is about media attention then those women are the gatekeepers. And if anybody in PR thinks this campaign has had a serious effect on the image of breast cancer – other than trivialising it – then I’m yet to meet them.

Furthermore, if women need to resort to sexual innuendo to be powerful then there’s something vastly wrong with society. Seriously. I thought we’d moved past that.

UPDATE: Funnily enough, a corollary, a perfect foil, a Facebook awareness campaign that works (in my opinion), is going on at pretty much the same time. The “RU ok” campaign is a perfect example of an awareness raising campaign that actually benefits the purpose it promotes. It encourages people to ask their friends if they’re ok – and it raises curiosity without trading on double entendre or outright crass innuendo.