The BBC has launched a cool web service called How Big Is It Really that lets you put the area of significant events, places and objects from throughout history on the map. Literally. Wherever you want. It will entertain you for at least five minutes. 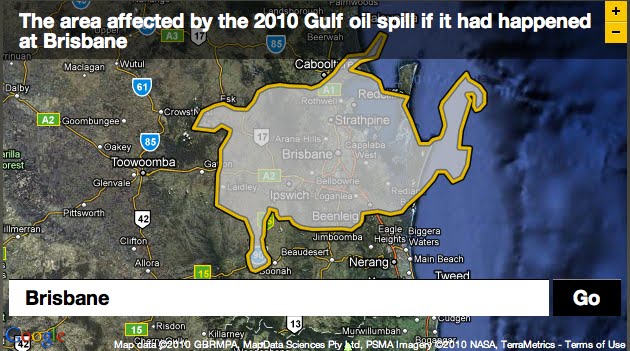 Teen “sensation” Justin Bieber ran a web competition for fans to choose his next tour destination. 4Chan got wind of it. Justin Bieber, if he honours the competition, is now going to North Korea. The BBC reported the story with unwarranted seriousness.

“Given the fact that almost all citizens of North Korea are denied internet access and there are restrictive controls over all media, it is unlikely that any of the votes have actually come from within the country.”

If you’re an aspiring criminal looking to move into the world of person to person transactions then learn from this guy. Mugging is a two step process.

The coolest thing about this story is that it happened in Australia.

The [three] thieves were assaulting a German medical exchange student in Sydney, but the alleyway where they struck was next to a school for ninja warriors.

One of the pupils raised the alarm after noticing the attack…

“We just ran outside and started running at them, yelling and everything,” said ninja master Kaylan Soto who instructed his students to take action.

“These guys have turned around and seen five ninjas in black ninja uniforms running towards them. They just bolted.”

A former Guantanamo Bay guard, Brandon Neely, joined Facebook and on a whim searched for some of the released detainees, leading to a remarkable exchange between them that is now the subject of a BBC doco. Pretty cool.

Mr Neely was 22 when he worked at the camp and left after six months to serve in Iraq. But after quitting the military his doubts about Guantanamo began to crystallise. This led to a spontaneous decision last year to reach out to his former prisoners.

“I was pretty new to Facebook and decided to type in their names to see if their profiles popped up and I came across Shafiq’s Facebook page. I decided to send him a little e-mail,” says Mr Neely.

You can read/watch what happened here.

Don’t say you weren’t warned – turns out all the media hype surrounding Swine Flu has been underdone – rather than over the top… until now.

A new strain of the swine flu virus H1N1 have been reported in London.

After death, this virus is able to restart the heart of it’s victim for up to two hours after the initial demise of the person where the individual behaves in extremely violent ways from what is believe to be a combination of brain damage and a chemical released into blood during “resurrection.”