Julia Gillard is in line (depending on the rest of the election campaign) to be our first elected female prime minister. As far as I can tell the only people more excited than the red heads and the females in the electorate are the atheists – because Gillard is out and proud. She’s not definitely the first atheist PM (as far as the internet is concerned Bob Hawke was an atheist, though he told Denton he’s an agnostic not an atheist). She could well be the first. And I thought there had been a pretty muted response from the Christian community – there were even a couple of great articles (one from John Dickson in the Herald, one from Greg Clarke on the ABC website, and one from Michael Jensen on sydneyanglicans.net) suggesting that it didn’t matter.

But the scaremongering has kicked in in the last few days – and more and more Christians I’m speaking to are expressing concern about the idea that Julia, an atheist, might be running the country. I don’t think that the disendorsed Liberal Candidate from Sydney, David Barker, speaks for all Christians when he says this – but he taps into a scary undercurrent in Christian thinking:

“I’m not anti-Muslim. I believe every one should have their own beliefs,” he said.

“But I don’t know if we want at this stage in Australian politics a Muslim in the Parliament and an atheist running the Government.”

Why don’t the atheists deserve a place in a democratically elected parliament? Shouldn’t the parliament be representative of the electorate. This means 10%, roughly speaking, of our politicians should be atheists. The fact that one rises to the top of their party is a testament to their ability and the faith their colleagues have in their ability to do the job.

I’m wondering at what point people think her atheism will impact her ability to govern. Or her ability to act as the leader of the nation. We don’t have the “Christian heritage” the U.S claims as they ban atheists from holding certain positions in public office. There’s nothing in the Bible that suggests the leaders of our nations should be God fearers (we’re not Israel – despite some people trying to insist that the Old Testament should apply to our legislative body today). The New Testament affirms the government of the day as a government chosen by God – and the Roman empire was perhaps the most anti-Christian regime of all time.

I don’t care that Gillard is an atheist. I care more that she sounds like a character out of Kath and Kim. I’ll weigh up my votes on policy alone. Some of those policy positions may be reached as a basis of the application of my faith. That’s my right as a voter. Even if my vote (which won’t go to Labor at this stage) counts for nothing (or just for one) and Labor retain power I’m not going to sleep poorly knowing that an atheist resides in the lodge. At least she’s open about her beliefs rather than claiming to be a lapsed Anglican – one wonders how much time John Howard has spent in church since losing power.

“Christians should be willing to change voting patterns after Christian reflection on particular policies. A believer who cannot imagine voting for the ”other side” has either determined that only one party aligns with the will of God or, more likely, is more attached to their cultural context than to the wisdom of scripture…

…So, what principles guide the Christian vote? First, a Christian vote is a vote for others. It is basic to the Christian outlook that life is to be devoted to the good of others before ourselves. In the political realm, Christians should use whatever influence they have to contribute to others, to ”consider others better” than themselves.”

If Christians are worried about Gillard’s moral compass (using the tired old chestnut that atheists can’t be moral) they should perhaps remember two things – all people, atheist or otherwise, are made in God’s image. I assume that includes some sort of moral compass coexisting with the sinful nature, all people (including Christians) have the capacity to act immorally, and all governments (atheist or otherwise) are provided by God. Even the ones that oppress Christians. We should cherish the opportunity we have to have a say in who rules us – but a vote based on scaremongering, or a “Christian Values Chart” like the one Simone rightly loathes, is a wasted vote.

There are people out there who aren’t blessed with a Bob Hawke head drink dispenser. 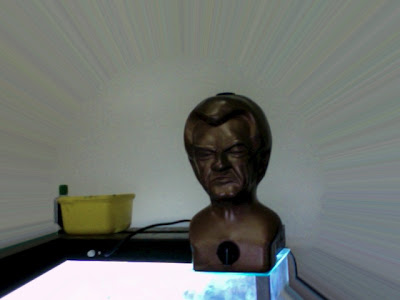 But don’t despair. You can have a great Australian summer party with your very own watermelon drink dispenser… 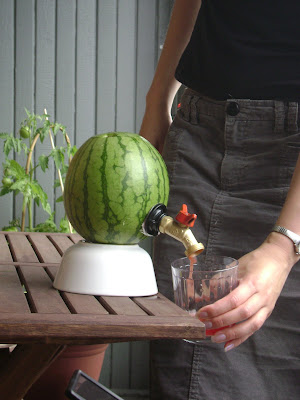 I will hire out the Bob Hawke head for Labour Parties… or anything else. I bought it for 25c at a garage sale on my second weekend in Townsville. 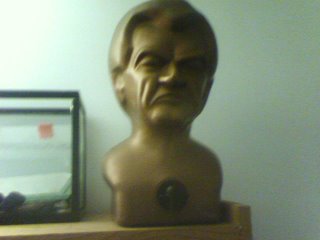 Here’s a picture of the highlight of my garage sale trip as promised.