Speech to text recognition software is one of personal computing’s final frontiers. The dream of sitting in a room and talking to your computer (and having it understand, compute, and respond accordingly) is, apparently, unlikely to ever become an actual reality. The problems are manifold – the biggest problems being that words are aurally ambiguous and we instinctively translate them based on context and expression, and that certain words have an array of meanings.

Here are a couple of snippets from this fascinating article, that ends up being more about language than voice recognition (you might also notice a couple of things I’ve posted recently in that article).

In 2001 recognition accuracy topped out at 80%, far short of HAL-like levels of comprehension. Adding data or computing power made no difference. Researchers at Carnegie Mellon University checked again in 2006 and found the situation unchanged. With human discrimination as high as 98%, the unclosed gap left little basis for conversation. But sticking to a few topics, like numbers, helped. Saying “one” into the phone works about as well as pressing a button, approaching 100% accuracy. But loosen the vocabulary constraint and recognition begins to drift, turning to vertigo in the wide-open vastness of linguistic space…

Many spoken words sound the same. Saying “recognize speech” makes a sound that can be indistinguishable from “wreck a nice beach.” Other laughers include “wreck an eyes peach” and “recondite speech.” But with a little knowledge of word meaning and grammar, it seems like a computer ought to be able to puzzle it out. Ironically, however, much of the progress in speech recognition came from a conscious rejection of the deeper dimensions of language. As an IBM researcher famously put it: “Every time I fire a linguist my system improves.” But pink-slipping all the linguistics PhDs only gets you 80% accuracy, at best…

Researchers have also tried to endow computers with knowledge of word meanings. Words are defined by other words, to state the seemingly obvious. And definitions, of course, live in a dictionary. In the early 1990s, Microsoft Research developed a system called MindNet which “read” the dictionary and traced out a network from each word out to every mention of it in the definitions of other words.

Words have multiple definitions until they are used in a sentence which narrows the possibilities. MindNet deduced the intended definition of a word by combing through the networks of the other words in the sentence, looking for overlap. Consider the sentence, “The driver struck the ball.” To figure out the intended meaning of “driver,” MindNet followed the network to the definition for “golf” which includes the word “ball.” So driver means a kind of golf club. Or does it? Maybe the sentence means a car crashed into a group of people at a party.

To guess meanings more accurately, MindNet expanded the data on which it based its statistics much as speech recognizers did. The program ingested encyclopedias and other online texts, carefully assigning probabilistic weights based on what it learned. But that wasn’t enough. MindNet’s goal of “resolving semantic ambiguities in text,” remains unattained. The project, the first undertaken by Microsoft Research after it was founded in 1991, was shelved in 2005.

I have more storage capacity on my keyring than the first five or six computers we owned combined.

That was a tangential segue worthy of Today Tonight. But tonight. In all its glory. I give you. The Coffee Casemod – a computer case with a built in, and working, software controlled drip filter coffee machine.

It is awesome. I commend it to you. 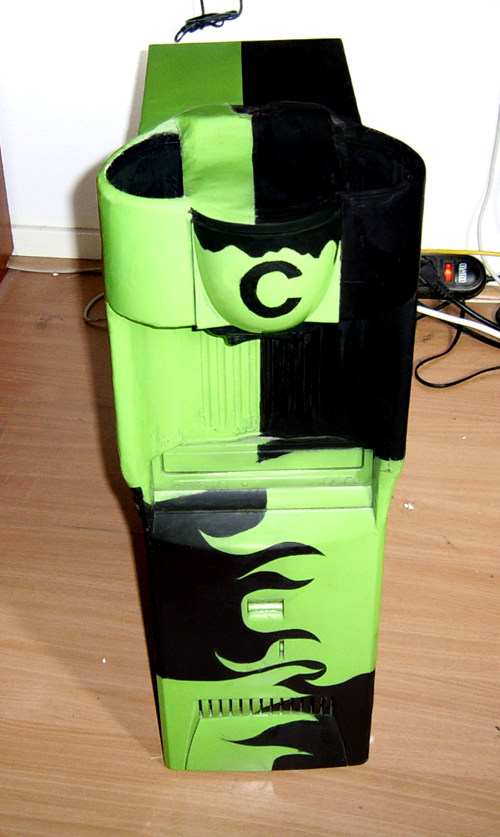 Here’s how to make your own.

Recently I purchased my first Mac. I quickly discovered that the Mac vs PC discussion is a touchy subject for some people and found it very ironic when a heated debate arose on my facebook wall.

I purchased a Mac because they have the reputation of working. Everytime. I don’t care that you can’t play games on a Mac as well as you can on a PC. I don’t care that you can’t watch movies to a high standard. I don’t even like playing computer games or watching movies. I don’t even care that you can’t customise it. I don’t even know how to customise computers, and, after watching my husband “improve” his PC, I wouldn’t want him to even try and customise my Mac. All I want to do is turn on my computer, use the internet, word process and then get on with my merry life without having to spend half of the day encountering problems. If I have to pay a little more for this reliability, then it’s money well spent in my opinion.

I should say here that the intention of this post is not to highlight the validity of my purchase. Neither is it weigh into the debate on Mac vs PC. If you want to have that debate at the end of this post go ahead, just don’t expect me to join in. I actually just want to relay this morning’s computer related events that I found vaguely amusing.

Having awoken to a beautiful winter Townsville morning, I decided to try and chat to my parents via Google chat. Unfortunately they were having technology issues at their end (they’re PC people) so the conversation didn’t take place. Throughout this time, Nathan had been on the upstairs desktop (PC) for well over three hours, trying to get a sermon written and some other pieces of work done. Every 3-4 minutes he popped down to see me while his computer restarted. Apparently he was having  some troubles. What can I say, he has a PC. Lunchtime rolled by and he joined me for some Indian curry before returning to the computer to try and get some work done. It was about this time that I stared to hear banging coming from upstairs. Things were not going so well. Graciously I offered to let him use my Mac so he could get the work done. He told me that he’d been intending to do this all morning, if only he could retrieve the work he’d started on the PC. I don’t know about you, but spending roughly four hours trying to open a document seems a little unproductive.

It’s now about an hour after the banging stopped and I haven’t seen or heard from him in awhile. I don’t know if this means the computer is working or if he’s found a book to read. Most likely the latter.

Robyn and  I have created quite the furore on Facebook by announcing our conversion to the cult of Mac.

I’m a long time PC apologist, meaning I have defended the humble personal computer’s virtues against the ravages of Apple’s sleek and appealing curves for years.

Pride comes before a fall.

When it comes to anything smaller than the desktop computer (where I think I’ll always appreciate the freedom to get under the hood) Macs are superior. There’s no denying it. They just work better.

That’s my reasoning – you can tell me I’m wrong here – or on Facebook.

If you haven’t heard of the Conficker Worm you must have been living under a bush or something. Even the ABC Morning Show in Townsville is talking about it.

To be honest I haven’t done anything about Conficker. I haven’t even checked my various computers for the nasty little monster. And now its fury is meant to be being unleashed upon us tomorrow I am feeling like I should.

The US Government has come to the rescue with a nice, easy test from a reputable(?) source…

I’ll be running it at home tonight. I think we’ll be right – but it’s probably worth checking.