I thoroughly enjoy Mark Driscoll’s ministry. I once flew 1600km to Brisbane to see him (when I lived in Townsville). I’ve downloaded plenty of sermons, and I subscribe to both his blog and the Resurgence blog that duplicates his posts. For a while the phrase “Mark Driscoll Fanboy” has returned my site in the first page of results on Google. In short, I am well qualified to make this assessment.

Mark Driscoll ruined Facebook. For everybody. John Piper may have ruined Twitter with his unabashed holiness – Mark Driscoll has ruined Facebook with his unabashed all round awesomeness – there isn’t an area of life that Mark Driscoll isn’t better than you at, nor one that he is not qualified to give you advice in. He is, of course, the model preacher, husband, father and man. Here are some of his status updates – each prompting an almost frenzied response from his legion of fans.

Mark Driscoll prepares his sermons in less than two hours while watching TV.

His children are more perfect (in every way) than yours.

He goes to hardware stores. Like real men do…

He’s funnier than you. Even in puerile ways. 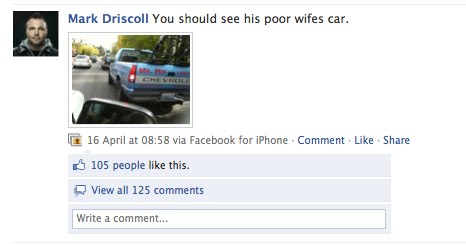 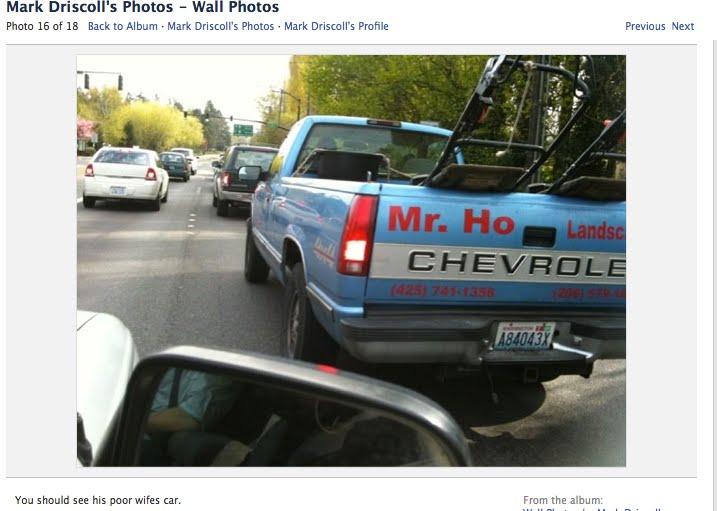 If you can’t read any of the text in those images click through to them on Picasa – these are all recent status updates from Pastor Mark’s fanpage.

Are you feeling inadequate?

Mark Driscoll has been invited to write occasional columns for the Washington Post. In his first he was asked how to best present the gospel to atheists and skeptics.

His answer, as his answers always are, was beautifully Christocentric.

Q: What makes the best ‘case for God’ to a skeptic or non-believer, an open-minded seeker, and to a person of faith and Why?

Christianity is not first and foremost about a sacred place to pilgrimage to, a philosophical system to ponder, a moral code to live, a religious tradition to honor, or an impersonal god to experience. Rather, Christianity is about a person who claimed to be the only God and said he would prove his unprecedented claim by living without sin, dying for sinners, and conquering death through resurrection.

It’s a nice opener. The gospel in a nutshell. And he doesn’t shy away from addressing other areas, but he starts with Jesus. And that’s worthy of respect. More respect than others who like to sit on their blogs and throw stones because they don’t like his sense of humour…

His conclusion is helpful too…

“And so while there is no “best case” for presenting God, there are false ways of presenting God: as anyone in addition to or other than Jesus Christ. As Christians, our goal is never to lie to people by only telling them what they want to hear, or manipulating them to feel what they want to feel. Instead, we want to respect them enough to tell them the truth, and love them enough to do so in a way that is compassionate. We care more about the truth and the love than having the “best case.”

I’ve been wondering, given recent experiences with atheists right here, how to move the debate away from discussing theism/atheism towards Christianity/atheism. It’s a great tactic the atheists have adopted to avoid dealing with Christianity specifically. It’s much easier to dismiss a non-specific deity on the basis of dismissing all deities (Christians do something similar all the time, by rejecting all other Gods) than it is to actually dismiss the specifics of the deity people are actually putting faith in. But it’s a case of moving the goal posts to suit the game you want to win.

The temptation, when discussing the existence of God in the theism/atheism paradigm is to throw our lot in with other theists (Muslims, Hindus, Mormons etc) and see them as allies – when a better, more Biblically consistent model is the one Driscoll advocates. Using an apologetic based on Jesus.

That’s why I’m a Driscoll fanboy. That, and the description he gives himself in his byline on the article.

“A nobody trying to tell everybody about Somebody.”

I have a new ambition in life… I want to write a book and have it burnt by the Amazing Grace Baptist church. You do too. You may not know it yet, but you’d be in great company. And if you go along you get BBQ or fried chicken – because they’re not works of Satan.

This video has been doing the rounds. It’s a news report on the Amazing Grace Baptist book burning – their list includes books by Billy Graham (a heretic), Mark Driskol (sic) (probably a heretic), and any version of the Bible that is not a King James. Because it, and only it, is the inspired, infallible, and inerrant word of God. I’ve always wondered what research the KJV only mob do to come to the conclusion that it was produced by better translators than our modern translators. I think I’ll try to contact this pastor guy and ask him. He has a church of 15, so he’ll have time. After the book burning of course…

The 9Marks website has a great article on this whole “the city is where it’s at” “theology” that’s sweeping through city churches (and church planters) at the moment with nary a thought for those poor country cousins.

While I love and appreciate cities for all their goodness, and have lived in cities (excluding Townsville – which is regional) for just under half my life, I also think healthy, wholesome country towns are the lifeblood of the church and are often neglected.

A big part of my professional life involves helping the push for a regional area in Queensland to get appropriate per capita (and per revenue raised) government investment into infrastructure. It’s an eternal frustration. There are few votes in pleasing the country areas – so we’re the poor second or third cousins when it comes to government priorities.

There’s a real danger that the church ends up looking the same. It takes courage for a city raised ministry candidate to move to the boondocks. There’s no (real) program for sending graduates into rural service like there is for other vital professions (school teaching etc). City churches are too keen to snap up graduates for their vibrant and exciting “city” ministry.

And of course, as some good friends would itch to point out, these city churches could telecast their services into regional areas as a pragmatic solution.

So good on the 9Marks guys for pointing out this flawed hermeneutic (and particularly flawed Biblical proof texting) of city based ministry. It’s one of the few problems I have with the Mars Hill fan club. And in fact any city centric thinking.

I have mentioned my feelings on the current wave of church planting enthusiasm before… But in summary – I think church planting is a good and necessary thing – particularly in areas experiencing population growth. I also think attendance patterns at churches (particularly Presbyterian Churches) in Queensland demonstrate the need for culturally relevant (dare I say “missional”) churches…

But, I am constantly frustrated by church planters and would be church planters putting down the old ways and old guys as they scurry up the ministry ladder. So I was greatly encouraged to read this post by Tasmanian church planter Mikey Lynch on why he likes to hear what the old guys have to say. There are a few bits of his list that seem to damn the old guard with faint praise – but the sentiment is praiseworthy.

You can head over there to read my comment. It’s long. And I feel a little bit like the Apostle Paul when I lay down my “credentials” for feeling the way I do… reluctantly foolish.

Also – in order to maintain my fantastic search engine ranking for the phrase “Driscoll fanboys” I should mention that those are the particular people I’m targeting with this rant.

Driscoll made broad generalisations when he visited our shores that have been latched onto like a mantra by a generation of bullish, headstrong, and arrogant young men (much like myself). Who want to make a difference and perhaps are looking for a point of difference. I’m not talking about people engaged in actual church planting currently – but those in pews being fired up and looking to lay blame for the current state of staid conservatism that misses the cultural mark.