Anna, of Goannatree, sent me this link (via an interesting looking blog called Young House Love), it’s one of those “what sort of x are you” things that searches through the database of Ikea products to find the closest, most Swedish, version of you…

I’ve been to Ikea twice since making the move to Brisbane – once with a bona fide Swede. I’m proud to announce that I am a small table. 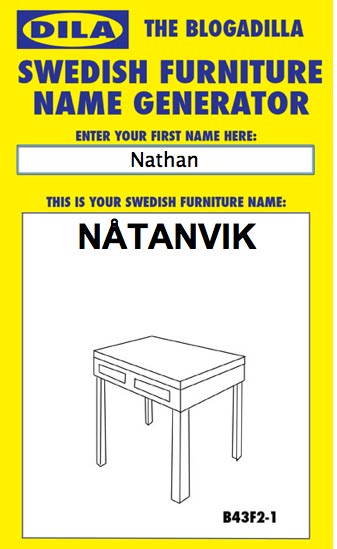 Anna at Goannatree sat through a Lord of the Rings marathon yesterday. She blogged it.

Check out the series. It’s good.

I propose a Godfather marathon before we leave Townsville – anyone interested?

Here are the links and intro paragraphs as they appear in the final post.

Seeing Lord of the Rings in a new light

Lord of the Rings Marathon Post #2
For those who have asked – we are watching the British extended edition. Apparently the only difference to the US version are the Easter eggs (the UK version doesn’t contain the Jack Black parody f…more

Lord of the Rings Marathon Post #3: On Saruman v Voldemort

Lord of the Rings Marathon Post # 4: The Logic of Merry

Lord of the Rings Marathon #5: The endurance of the battle and a little humour

Well, Anna from goannatree tagged me in a meme. Let me just say that I think meme is a stupid word. But I’ve never been tagged in a meme before – not even the stupid ones on Facebook. So I’ll do it. I have to: “share the titles and authors of 15 books that will stay with you, or have stayed with you. You are to write this list in less than 15 minutes.”

This will probably show me up as the trashy “pop culture” reader that I am… and I probably deserve it. Actually, I decided to pad out the list with impressive sounding books that I remember… I cheated really.

Sadly, other than the Bible, I really struggle to finish Christian books – they’re often hundreds of pages talking about an idea that could be summed up in a nice, concise, blog post.

You are all now tagged. Feel free to put your list here in the comments – or on your own blog, but make sure you put a link to your post in said comments…

I’m a sucker for a good bit of other person promotion. And it’s probably time I mentioned Goannatree anyway.

It’s a good place to read intelligent scholarship from a Christian who is into literature, the arts and all sorts of culture.

This week Goannatree is running a book giveaway to encourage lurkers out of the woodworks – and probably to score a swag of new readers. So get along, check it out. You won’t be disappointed.