Man hugs are pretty awesome. I’ve just been thinking about the furore surrounding the Poe’s Law breach that occured with that Christian Side Hug rap video. It turns out the video was serious – but the origin of the concept was satire.

It used to be that in order for heterosexual males to demonstrate man to man affection they had to engage in play fighting or wrestling. This was a little too subtle. The key to a good, unambiguous piece of man to man affection is to send the right signals during the hug.

This is accomplished using the obligatory three taps, or firm pats, on the back of both parties to the hug. In a group hug – say the hug that comes when celebrating a goal in soccer – these pats are not necessary.

The three pats are said to be non verbal communication for “I’m not gay”… but they are in fact an act of manly testosterone fueled but properly directed aggression.

Here is the rule for hugging expressed in haiku.

This easy Japanese poem is the key to more expressive man to man relationships.

Everybody likes a hug. Except people who have phobias about physical contact or an overdeveloped sense of personal space.

Sometimes hugging for long periods of time can be taxing. Sometimes it’s not geographically possible. Which leaves the huggy (as opposed to hugger) feeling down. 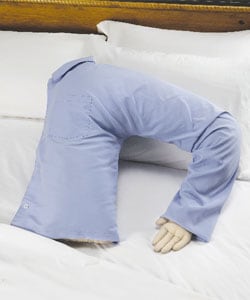 That’s called “the Zaky”. Here’s a blurb… if you’re curious…

“f you’ve ever wished for a hand to leave behind so that your baby would feel as if you’ve never left the room, your prayers have been answered with the Zaky.

The Zaky is an ergonomic infant pillow designed by a mom to mimic the size, weight, touch, and feel of her hand and forearm to help her baby with comfort, support, protection, and development. The Zaky can help calm your baby and help your baby sleep better through the night.”

And then there’s those of us looking for someone to be hugged by. Perhaps every town needs one of these…

It’s an anonymous “hugging” wall. Because lets face it, having a long haired hippy run up and hug you on the street isn’t for everybody.