Possibly the most important art of manliness ever. 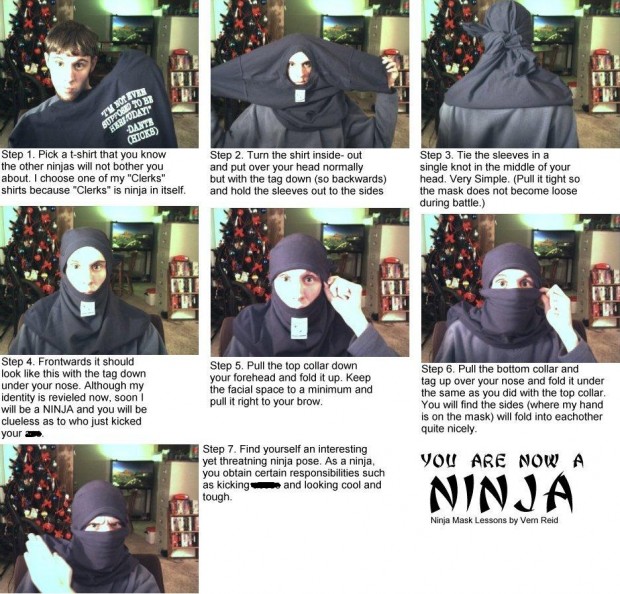 This guy is pretty awesome – he could kill you with a magazine. Watch.

Or, if you want to carry all of those at once… a briefcase.

I’d go to a restaurant called Ninja. If I could find it. If you don’t like the food – they chop you in half*.

“The ninja is mysterious,” said Ou Chia-wei, owner of the restaurant simply named Ninja, explaining why he chose that theme for the Japanese-style restaurant. “On that premise, we can do magic tricks and light up the food.”

A moat and screen of cascading water just past the front entrance make customers wait a few minutes until the drawbridge goes up, leading to a dark stairwell toward the dining hall.”

Besides the typical ninja uniform, the ninja would use any type of clothing that would get them closer to the mission goal. Sometimes the ninja dressed up as priests, peasants or even samurai. Whatever the mission required, they did.

So, now you’re wondering why I am still talking. You’ve got my point. Well, no. You haven’t. Have you seen the Mythbusters Ninja Episode – it’s my favourite – not because they do cool ninja stuff, but because they go to a ninja warehouse and buy awesome ninja equipment for their ninja mission.

Well, there’s a place like that on the internet. And you can buy a ninja suit for $69 (I assume US) that includes ninja shoes, ninja socks and ninja boots. You can get a different pack that comes with some gear as well for $82. I know what I want for Christmas… or a wedding anniversary present… (hint, hint).

You can also buy ninja gear, and buy all the ninja weapons you could possibly want from here. If that’s legal in your country.

The Japanese – famous for a love of baseball, over-exaggerated television programming and Samurais.

Did you see it? Obama. Killed. A. Fly. With his bare hands. My hatred for flies is well documented. And now, when I’m home for Christmas, I’ll be able to use the presidential defense when I swat a fly with my hands…

More significantly – Obama is a ninja. Check it out.

This little piece of karate awesomeness (sans chopsticks) has earned Obama the ire of PETA. As if he didn’t have enough to worry about.

PETA’s blog – called the “PETA Files” (as if we needed any more evidence that they’re a massive joke foisted on us by the ultra right) – loudly condemned the President – and the story has received global attention.

They’re sending him one of these awful fly catchers – who needs one of these when you have such awesome ninja skills.

“Simply place Katcha Bug over the bug and slowly slide its plastic trapdoor shut. The bug will step onto the trapdoor as it closes, and you can carry Katcha Bug outside, where all you need to do is slide the trap door open, allowing the bug to walk away. “

Here’s what PETA said – it’s a bit of a beat up – but still, it’s worth learning that if you want to be taken seriously you need to pick your battles.

“Believe it or not, we’ve actually been contacted by multiple media outlets wanting to know PETA’s official response to the executive insect execution,” a blog on the group’s website explained. “In a nutshell, our position is this: He isn’t the Buddha, he’s a human being, and human beings have a long way to go before they think before they act.”

Shurikens make for awesome home decorating. They’re cooler if you throw them at the wall and they stick in – but these “coat hooks” are pretty cool.

“The Ninja Coat Hooks look will transform your hallway into the scene of a Shanghai back street stand-off. Each metal Ninja Coat Hook has one corner cleverly engineered into a screw, which allows you to fix securely to your wall or door, whilst making it look like it has been hurled from the hands of a deadly Ninjitsu assassin.”

All meals are better ninja flavoured. So these ninja salt and pepper shakers are just the ticket.

Who am I kidding? Ninjas move so quickly they leave no trace – but having one of these graffitied signs outside your abode would be awesome…

You know what this is? The most awesome USB drive ever – even cooler than the guy who turned his finger into a thumb drive… it’s a shuriken. For your ninja themed office.

It’ll only set you back ¥10500 for 2GB of storage and comes with this warning:

It’s nice when online T-Shirt vendors like SnorgTees keep up with modern pop culture references – like Flight of the Conchords songs.

Also cool, and also from SnorgTees is this ninja shirt.