Link blogger Jason Kottke made a bookmarking service that feels a bit like Twitter but is better than the new Facebook (which seems to just consist of people sharing semi-lame web comics and pictures that used to belong on Tumblr – has anybody else noticed this?). Kottke’s service is called Stellar. And I’m on it. And it’s great. It’s like the web being curated by people who have taste. Or something. I’ve posted a fair bit of stuff here that I’ve found there. And you can follow my stream (the stuff I share there – by favouriting elsewhere). I think it’s at a Beta stage where you request an invite still – but my invite came about 2 hours after my request. So get on board. And let me know.

There is often a dissonance between what a company wants its brand to be and what its brand actually is. Your logo is not your brand. Your brand is what people think of you when they see your logo…

These are some “corrections” of famous brands.

There are a few more here, where I found them.

Google put together this presentation of cool stuff from around the web. I’ll no doubt blog some of it – but if you want an advanced screening and haven’t seen this yet check it out.

Why a Government controlled blacklist is a bad idea…

Other Australian sites on the list are (“Tuckshop and Canteen Management Consultants”) and , animal carers MaroochyBoardingKennels.com.au.

Nice work ACMA. The list has been released by wikileaks.

“The dentist, Dr John Golbrani, was furious when contacted to inform him that his site, dentaldistinction.com.au, appeared on the blacklist.

“A Russian company broke into our website a couple of years back and they were putting pornographic listings on there … [but] we changed across to a different web provider and we haven’t had that problem since,” Golbrani said in a phone interview.

Some stats from American church surveys – 29% describe themselves as strongly associated with the Democrats while only 12% call themselves strong Republicans.

Nothing. It’s got bacon. In fact, it’s made out of real bacon. Here’s the step by step guide.

Want to make your own logically tasty Sudoku pizza? Here’s how.

Colour in a Zebra…

It’s funny because it’s true. I have had this dream.

So fundamentally stupid it must have been designed by an atheist looking to ride the religious cash cow.

Lets face it. Despite my constant references to the gyroscopic personal transport device Segways have not taken the world by storm.

Perhaps the underlying technology was just not used to its full potential. Maybe. Just maybe. Someone should have considered how much more awesome a segway would have been were it based on an octopus. With tentacles instead of wheels. What do you mean someone has already done that?  Why are all the good ideas taken? It’s called the Cajun Crawler – and here it is in action…

I would have blogged this yesterday – but my host was down so you’ll see it today (unless you’re seeing it in Google Reader now).

Here’s something for all the Psycho fans out there – turn your shower cubicle into a crime scene with this bath mat. The Smashing Pumpkins have been one of my favourite bands since Ben introduced me to them in grade 11. He incessantly talked about them. They were impossible to avoid.

Super Mario Brothers is one of my favourite games of all time. How can you not enjoy taking the guise of a plumber and running around a world full of walking fungus and drain pipes filled with treasure?

So combining the two is pure awesomeness.

I’ve always wanted a beard. I mean, who wouldn’t. Shaving is a pain in the neck. But alas, unlike my facially hirsute father I am follicly challenged on the lower part of my head rather than the top. But now, thanks to the miracles of modern knitting technology “I can hast beard”… and can even order a moustache to match every occasion. I give you. The Beardhead.

Robyn loves a good puzzle. So no doubt if she had her way our house would be decked out with this sort of classy furniture. They’re available for an unspecified but no doubt expensive price from here. 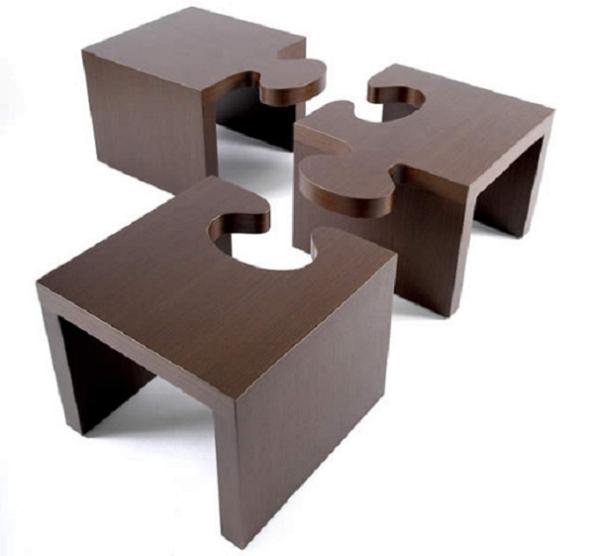 Me, well, apparently I’m a nerd (or a geek) so I’d be more likely to deck our place out with these chairs of retro gaming awesomeness. Pacman eat your heart out.