I sent the following email to the Prime Minister. Please feel free to join me in this campaign.

In last Saturday’s Courier Mail a story (attached) ran depicting the Pygmy Hedgehog. The Pygmy Hedgehog, or African Pygmy Hedgehog, is very small and cute. As you’ll see in the picture from the attached article. It is also illegal to own one as a pet in Australia, and to import them (according to the Department of Environment Exotic Animal Guide).

I write to petition you to allow the import of these animals into Australia because they are very cute and would make good pets.

They are, as I mentioned, very small and unlikely to pose as a threat to natural wildlife if released into the wild (but who would release a pet this cute into the wild).

They eat a balanced diet of insects and cat food.

The reason Wikipedia gives (http://en.wikipedia.org/wiki/Domesticated_hedgehog) for many countries not allowing pygmy hedgehogs is that they can carry “foot in mouth” disease.

I’m sure that you, as politicians, can relate to this disease and understand that it is no big deal as the news cycle only lasts a couple of days and then slip-ups are forgotten.

Foot in mouth disease, and hedgehogs (if eaten), may also help to eradicate the cane toad.

Foot-in-mouth disease is also carried by many other animals. Including Deer. Which according to that same exotic animal checklist (http://www.environment.gov.au/biodiversity/trade-use/exoticanimalguide/list.html) are able to be imported.

These are just a sampling of the reasons that you should consider to allow the import of these hedgehogs.

At the end of the day the equation is very simple. The cuteness of these animals far outweighs any negatives as either a biosecurity issue or environmental impact.

If you are not able to allow the import of Pygmy Hedgehogs at this time could you please advise what steps must be taken to one day enable Australian pet owners the basic human right to own whatever animal we please. This right was established in the Christian creation account in Genesis. In prohibiting the import of this animal you are limiting our right to exercise dominion over creation. I know you are both Christian men so you will understand the importance of this.

I have CC’d the Australian Christian Lobby’s Jim Wallace in the hope that this matter will become part of the ACL policy platform. As you can tell I am keen to explore all possible avenues of persuasion in order to buy one of these for my wife. She isn’t sick or dying so I can’t tug on your heart strings. But she does love animals. And I think this would be a fantastic Christmas present.

I look forward to receiving your response.

PS. I didn’t vote for you last time – so I’ll understand if you don’t want to help me. But allowing the import of these hedgehogs would sway my vote this time. They are better looking than Malcolm Turnbull. 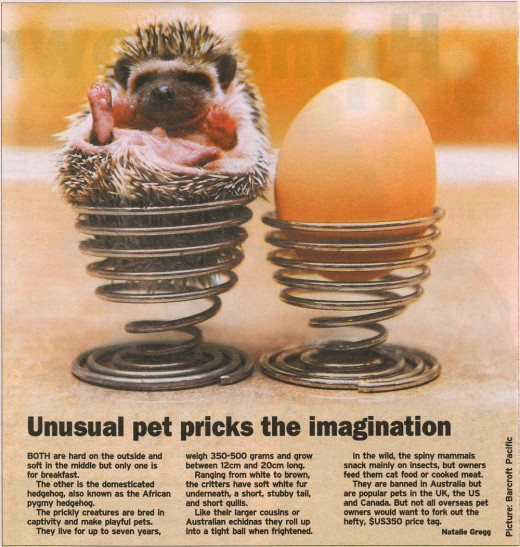 Hello blog reader. It has been a while since my last post and much has happened. I recently celebrated the…

Sadly, as far as I can tell, this isn’t a real toy but a work of art. I found this…

7 thoughts on “Letter to the Prime Minister”