Ben is one of my favourite bloggers. He’s also probably my favourite e-friend. I’ve never met him in the real world but his blog is grand and his comments elsewhere are open, honest and full of goodness. Ben drew the little logo on the top right of my page. I’m eternally grateful to him for that.

Ben lives in Sydney with the vowels E, e, and i. His blog is full of the goodness of Proverbs, Peanuts, a weekly quiz and reflections on life in Sydney. As well as the occasional piece of art, cultural review and insight into Ben’s struggles. It’s like a Snuggie (the wearable blanket not the nappy).

Did you know that Ben is an animator? Cool huh. From what I can gather he works on children’s cartoons. But I might be wrong. There was a time when his inimitable Monday Quiz was accompanied by a weekly cartoon. Like this one. 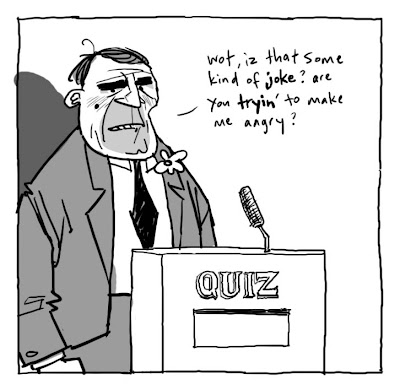 The key to good animation – or in fact good crafting of any production – is storyboarding. And that is where Ben has chosen to share his expertise as part of “Mad Skillz Week”… I emailed some people last week asking them to contribute (and I thought I’d posted this invitation the other day – but I couldn’t find it when I went looking).

I work in animation, mostly doing storyboards for kids TV cartoons. A storyboard is like a rough laying out of an episode, using a script and soundtrack as the guide. It shows visually how the story will go, and will set up all the required shots. From there it gets into all the laborious gruntwork of actually animating all this– something that I aspire to never have to do myself. Here’s a few things that I’ve learnt the hard way over the years.

Follow these 5 tips, and you will soar to realms you dared not ponder in your wildest dreams.

There you have it. Thanks Ben. Anyone else interested in taking part in Mad Skillz Week should send me an email (nm dot campbell at gmail dot come).

1 Comment → Mad Skillz: Ben on how to create an animation storyboard