Bruce’s teaching on this matter has been pretty influential – here’s a photo of two of his students seeking the welfare of the ancient city of Corinth. 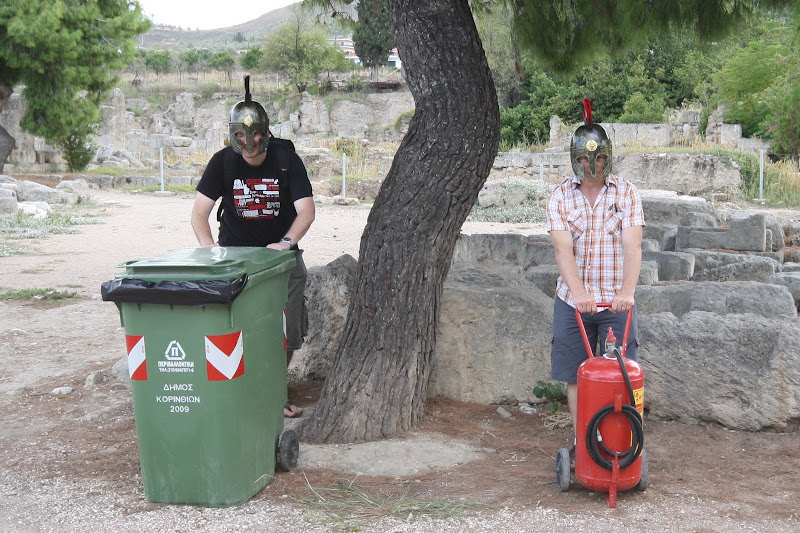 As mentioned in the previous post, the issue of public benefaction presents an interesting dilemma for interpreting 1 Thessalonians 4 – which prima facie (at first glance, just a little phrase I picked up in my three years as a law student) suggests Christians should live quite lives…

A secular patron who converts to Christianity must go from being a patron seeking honour from his clients, to a private benefactor, bestowing generosity on those around him without the honour his previous status brought. Bruce contends that Paul’s sharp use of his own example in 2 Thessalonians 3:6-13 came as a result of the Thessalonians’ collective inability to do this. Christians, so far as Paul was concerned, were to be benefactors (whether public or private) of those around them.

“7 For you yourselves know how you ought to follow our example. We were not idle when we were with you, 8 nor did we eat anyone’s food without paying for it. On the contrary, we worked night and day, laboring and toiling so that we would not be a burden to any of you. 9 We did this, not because we do not have the right to such help, but in order to offer ourselves as a model for you to imitate. 10 For even when we were with you, we gave you this rule: “The one who is unwilling to work shall not eat.”

“12 Such people we command and urge in the Lord Jesus Christ to settle down and earn the food they eat. 13 And as for you, brothers and sisters, never tire of doing what is good.”

Some scholars have speculated that the situation underpinning these non-working eaters was a drought and work shortage – Bruce suggests this would make Paul a little unsympathetic to their plight. Others suggest that converts had taken the example of the Cynics and quite their jobs, taking to the streets. Others suggest it was an aversion to manual labor that prevented the Thessalonians getting in and working.

Underpinning the issue in 1 & 2 Thessalonians (especially 2) is the fact that some Christians are providing food for those who aren’t working for it – there’s some sort of patron-client thing going on. And Paul has a problem with this. But some have identified a problem with suggesting there’s a problem with the patron-client relationship being the model – because patrons only formed relationships with people of the same social status with less wealth, this objection comes from the characterisation of the early church as lower class only… So the idea that they’re clients suggests that they have some status.

Clients had all sorts of social obligations to their patron, and by keeping them they were able to receive the generosity of the patron, it was a symbiotic rather than parasitic relationship though, because the patron’s social status was based on the size of his clientele. It’s possible that a bloke named Aristarchus who gets two mentions in Acts as a member of the church was a wealthy guy (there is an Aristarchus from Thessalonica at the same time who was a local pollie). Someone of that standing would have had the means to be both a civic and a private benefactor. Jason, Paul’s host in Thessalonica also appears to have been a wealthy man. And women could be benefactors too.

A patron who converted would have had to maintain their non-Christian client base. And Christian patrons with Christian clients would have resulted in an unhealthy power dynamic cutting both ways (the patron would have to honour their client’s requests, while the client would be the patron’s subordinate). Not an easy situation to be in, so Paul was keen for them to avoid those relationships all together.

Many have taken the 1 Thessalonians 4:11 verse mentioned in the previous post to entail keeping out of public life, to turn to a life of political quietism. The term was used to describe a person who gave up public duties in order to rest – but the alternative Paul puts forward is not to rest, but rather to stop being a busy body and to get back to working with one’s hands. Bruce thinks the starkest contrast possible to the life of the quiet worker who fed themselves by their labours was the client. Clients were political activists for their patrons – like a crowd in South Park chanting “rabble, rabble, rabble” their job was to make noise on their patron’s behalf. There are shades of Plato’s Republic in this command not to be a busybody, Plato says to “do one’s business and not to be a busybody is just.” Paul’s use of the term “busybody” most likely describes clients doing their patron’s work in the public square, and not looking to their own affairs.

Paul wanted Christians to live lives admired by all, “commanding the respect of outsiders” (1 Thes 4:12), and the life of the client impressed nobody but his patron – groups of clients would even get into fisticuffs with clients of their patron’s rival.

Paul’s exhortation towards quietism is not a general command – but a specific one to the “some” who do not work, “such” as they are to do their own work and eat their own bread.

Paul wants the Thessalonians to follow his paradosis his example amongst them, in word and deed. Commanding people to stay away from (and not feed) the idle man was the manner Paul used to break the link between patron and client within the church – but Christians weren’t just to work for their food, they were to do good too (2 Thes 3:13). They were to be a benefit for their city – Bruce argues that Paul’s objections to the patron-client relationship aren’t about upsetting the civic apple cart, but rather are about encouraging the Christians to make positive contributions to the city, rather than being a drain on resources. Christians were to be benefactors to the truly needy, not to those who were able to work, but wouldn’t.

This is really the craziest piece of legislation I’ve ever seen. Thanks Peter Singer. clipped from www.smh.com.au Don’t make a…

It’s probably time I addressed Amy’s second point. 2. Global pollution and/or global warming are going to have the strongest…

1 thought on “New Testament 102: Seeking the Welfare of the City in 1 & 2 Thessalonians”