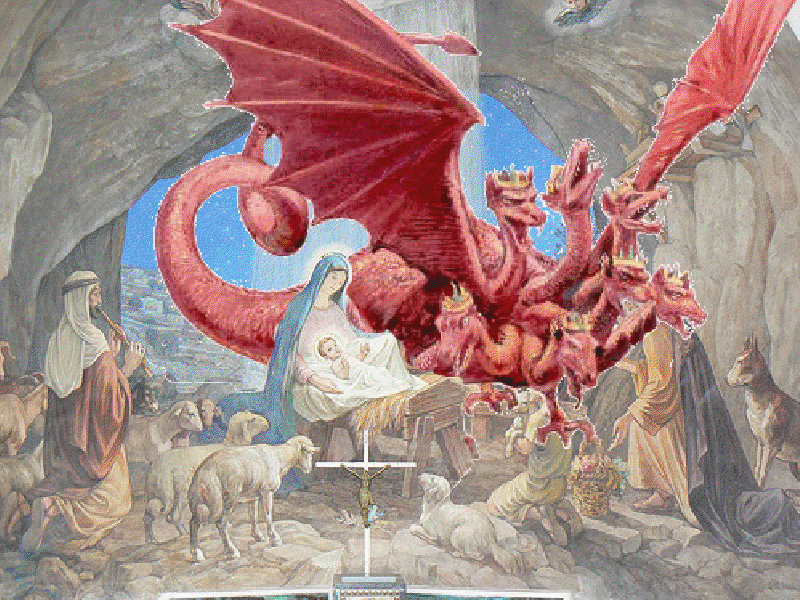 What does Christmas have in common with a seven-headed dragon?

Ever wondered why the birth of baby Jesus so long ago is still a big deal? Here’s a nativity scene that doesn’t get preached on all that much in Christmas services, from Revelation chapter 12. It’s what’s going down in a figurative sense in the person of Jesus.

1 A great sign appeared in heaven: a woman clothed with the sun, with the moon under her feet and a crown of twelve stars on her head. 2 She was pregnant and cried out in pain as she was about to give birth. 3 Then another sign appeared in heaven: an enormous red dragon with seven heads and ten horns and seven crowns on its heads. 4 Its tail swept a third of the stars out of the sky and flung them to the earth. The dragon stood in front of the woman who was about to give birth, so that it might devour her child the moment he was born. 5 She gave birth to a son, a male child, who “will rule all the nations with an iron scepter.” And her child was snatched up to God and to his throne. 6 The woman fled into the wilderness to a place prepared for her by God, where she might be taken care of for 1,260 days.

“Now have come the salvation and the power
and the kingdom of our God,
and the authority of his Messiah.
For the accuser of our brothers and sisters,
who accuses them before our God day and night,
has been hurled down.
11 They triumphed over him
by the blood of the Lamb
and by the word of their testimony;
they did not love their lives so much
as to shrink from death.
12 Therefore rejoice, you heavens
and you who dwell in them!
But woe to the earth and the sea,
because the devil has gone down to you!
He is filled with fury,
because he knows that his time is short.”

Jesus wins. Why this passage isn’t at the top of the Christmas pile is beyond me. I reckon a Christmas lights diorama of this passage installed at your church would win all sorts of prizes.

Summer, Autumn and Winter say hi. Spring is going through a rough stage of cantankerous adolescence and refuses to contribute…

According to some Christian’s it’s no coincidence that Santa is an anagram of Satan. My wife doesn’t think fondly of…

The title speaks for itself really. My question from this Christmas is: Why don’t we sing carols all year round?…