Paws for Thought: some gleanings from an essay on animal maulings in the OT

The challenge was to figure out what the stories about prophets contribute to a reading of 1-2 Kings. I wanted to do this story from 2 Kings 2. It’s short, so I’ll include the whole thing.

“23 From there Elisha went up to Bethel. As he was walking along the road, some boys came out of the town and jeered at him. “Get out of here, baldy!” they said. “Get out of here, baldy!” 24 He turned around, looked at them and called down a curse on them in the name of the Lord. Then two bears came out of the woods and mauled forty-two of the boys. 25 And he went on to Mount Carmel and from there returned to Samaria.”

Needless to say – I don’t think this captures the rhetorical weight of the passage, or its contribution to 1-2 Kings. But it’s pretty common for how the “new atheists” and their ilk read the Old Testament.

There’s not a whole lot written about this particular story, so I had to broaden it. I haven’t found many people pushing this exact line, and series of links – but it’s pretty exciting, and a much more satisfying reading of the passage than the ones that emphasise the injustice of the particular judgment on a gang of youths. The issue at play is a refusal to listen to, or recognise, a prophet who has just been essentially recognised as God’s instrument, and the bearer of his voice – Elisha is called, almost from this point on, a “man of God” – a title previously reserved for a couple of other prophets, David, and Moses.

Broadening this little exercise out proved easier than I thought.

First of all, there’s a really nice parallel with 1 Kings 13. Which also takes place near Bethel. Also features a man of God. And also features a mauling on the road to/from the city. Here are the apposite verses. But read the whole thing. The man of God is lured back to Bethel by a lying prophet. Then this happens:

20 While they were sitting at the table, the word of the Lord came to the old prophet who had brought him back. 21 He cried out to the man of God who had come from Judah, “This is what the Lord says: ‘You have defied the word of the Lord and have not kept the command theLord your God gave you. 22 You came back and ate bread and drank water in the place where he told you not to eat or drink. Therefore your body will not be buried in the tomb of your ancestors.’”

23 When the man of God had finished eating and drinking, the prophet who had brought him back saddled his donkey for him. 24 As he went on his way, a lion met him on the road and killed him, and his body was left lying on the road, with both the donkey and the lion standing beside it. 25 Some people who passed by saw the body lying there, with the lion standing beside the body, and they went and reported it in the city where the old prophet lived.

Here’s a picture from the Brick Testament’s retelling of the story. 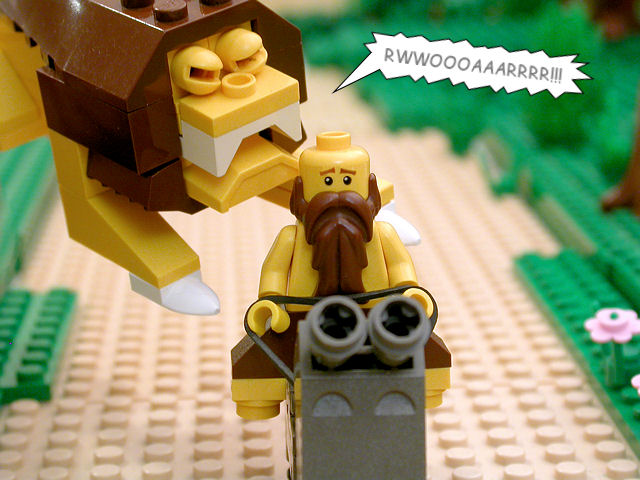 The link between the two stories isn’t too hard to establish – two men of God, one city, two animal attacks. They’re also both pretty shamelessly lampooned by people who don’t really like the Bible, and just want to treat it as a series of disconnected stories.

Animal attacks as vehicles of judgment – especially lions – are common in Kings (see 1 Kings 20:36, and 2 Kings 17:25). There’s a snake attack in Numbers 21 that is fairly similar (which is, incidentally, directly tied to Jesus in John 3).

Working backwards from this case of lions, (no tigers), and bears… oh my…

We see David – the king of Israel at its zenith – bragging about his beast slaying capabilities (1 Samuel 17:34-36).

34 But David said to Saul, “Your servant has been keeping his father’s sheep. When a lion or a bear came and carried off a sheep from the flock, 35 I went after it, struck it and rescued the sheep from its mouth. When it turned on me, I seizedit by its hair, struck it and killed it. 36 Your servant has killed both the lion and the bear; this uncircumcised Philistine will be like one of them, because he has defied the armies of the living God. 37 The Lord who delivered me from the paw of the lion and the paw of the bear will deliver me from the hand of this Philistine.”

And earlier, Samson, who is something of an prototypical deliverer, ripping apart a lion with his bear(sic) hands (Judges 14)…

5 Samson went down to Timnah together with his father and mother. As they approached the vineyards of Timnah, suddenly a young lion came roaring toward him. 6 The Spirit of the Lord came upon him in power so that he tore the lion apart with his bare hands as he might have torn a young goat. But he told neither his father nor his mother what he had done.

Interestingly – in both these stories the slaying of these beasties is attributed to God – they’re clearly scary monsters for Israelites who can generally do what they please when it comes to people who wander the streets alone – I think you could make the case that wild animals – especially lions and bears – were the Israelite equivalent of the monster under the bed.

Which is interesting. The absence of such attacks also seems to be at the heart of the prophetic picture of a restored Israel too, and especially symbolic of the reign of the future David – or Root of Jesse – as Isaiah describes it (see 11:1-11, also 35:7-10. and 65:23-25)… this is the key bit…

6 The wolf will live with the lamb,
the leopard will lie down with the goat,
the calf and the lion and the yearling together;
and a little child will lead them.
7 The cow will feed with the bear,
their young will lie down together,
and the lion will eat straw like the ox.
8 The infant will play near the hole of the cobra,
and the young child put his hand into the viper’s nest.

Here’s the awesome sauce that ties it all together. Leviticus 26.

“‘Do not make idols or set up an image or a sacred stone for yourselves, and do not place a carved stone in your land to bow down before it. I am the Lord your God.

2 “‘Observe my Sabbaths and have reverence for my sanctuary. I am the Lord.

21 “‘If you remain hostile toward me and refuse to listen to me, I will multiply your afflictions seven times over, as your sins deserve. 22 I will send wild animals against you, and they will rob you of your children, destroy your cattle and make you so few in number that your roads will be deserted…

27 “‘If in spite of this you still do not listen to me but continue to be hostile toward me, 28 then in my anger I will be hostile toward you, and I myself will punish you for your sins seven times over. 29 You will eat the flesh of your sons and the flesh of your daughters. 30 I will destroy your high places, cut down your incense altars and pile your dead bodies on the lifeless forms of your idols, and I will abhor you. 31 I will turn your cities into ruins and lay waste your sanctuaries, and I will take no delight in the pleasing aroma of your offerings. 32 I will lay waste the land, so that your enemies who live there will be appalled. 33 I will scatter you among the nations and will draw out my sword and pursue you. Your land will be laid waste, and your cities will lie in ruins.

Now. Some scholars will use this to suggest that Leviticus and 1-2 Kings were written by the same person, or school… after the fact. But this nice little thread that, if snakes are included, moves all the way from Genesis to Jesus, is pretty cool. Especially when this link is made nice and explicit in Revelation 5, where all the mixed animal metaphors, and the Isaiah 11 prophecy – judge, Davidic king, and deliverer – are mixed up nicely in the person of Jesus.

5 Then one of the elders said to me, “Do not weep! See, the Lion of the tribe of Judah, the Root of David, has triumphed. He is able to open the scroll and its seven seals.”

6 Then I saw a Lamb, looking as if it had been slain, standing at the center of the throne…

That’s why I reckon the Bible is pretty fun.

2 thoughts on “Paws for Thought: some gleanings from an essay on animal maulings in the OT”