Facebook is a bit of a minefield for marketing/communication people to navigate at the best of times. It can be incredibly useful, and plenty of businesses swear by it, but it can also be an incredible waste of time. Especially because Facebook keep changing the game. And they keep finding all the really effective ways people are using the platform to boost their business without paying – and killing them.

I’ve got a few marketing clients who use Facebook, I use Facebook advertising to help out with my sister-in-law’s bridal make-up and children’s theatre companies, and I use Facebook to promote Stir, a Christian event in Brisbane, and think about how we use Facebook as a church. Incidentally – it appears Facebook is currently doing a survey where they’re giving out $25 in advertising credit.

I know heaps of sole trader small business/creative/entrepreneurial types who use Facebook as the sole means of promoting their business and finding clients. While these friends of mine have chosen Facebook because they don’t want to spend on advertising – I don’t think this change represents a hurdle for these types of business. This model, resisting advertising, relies on creating good products, and putting these creations on Facebook in a way that encourages sharing. It’s word of mouth stuff. That just takes strategy, encouraging people/customers to share your business with their friends, and putting up posts that people are more likely to interact with and share. That business model isn’t really going to be threatened by this change unless a huge number of people start paying to have their posts shared in a way that clogs up all of their friends’ news feeds.

In the last couple of days Facebook has rolled out a new revenue raiser. The “promote post” option – not just for pages, but for individuals. You can pay to make sure every one of your friends sees your latest update. I assume the cost is figured out by how many of your friends are regularly interacting with your posts, and how many friends you have might also be a factor. 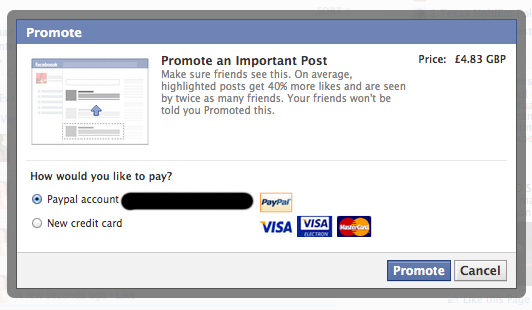 This is potentially a game changer – both positively and negatively. Here’s some reasons why.

First of all – Facebook is now a public company, it has to make money for its shareholders, it has to produce revenue to pay its costs, and people don’t really love anything Facebook does to make money, because for some reason we think it’s free.

There’s an old saying, If you’re not paying for Facebook, you’re the product, not the customer. It’s trite, but true.

Second, the real strength of Facebook, for companies, and particularly for churches, is the platform it provides to communicate to people who have opted in by liking your gear – ads that convert to likes are ultimately more valuable in the long term, than ads that convert to one off sales, or event attendance.

Third, in my experience, advertising is good at securing likes. But, unless you’re serving up ads to your fan base, rather than to your targeted audience, it’s likely that you’re paying about $0.80 for a like that goes nowhere. The chance to send a guaranteed post to the newsfeeds of 800 people for five British pounds is, in my mind, better than the return on investment where you pay $20 for 25 likes. But used together, there’s a good chance to turn likes into something a bit more ongoing.

Fourth, until this change – there was no guarantee that what you post on Facebook gets into your friends’/followers’ news feeds. Facebook is clever. It knows you won’t come back if all you see is 13 photos of cats from your aunt’s crazy friend who you accepted because you know how fragile her delicate ego is and you didn’t want to push her over the edge. It also knows you don’t want to be constantly spammed by businesses you don’t really value, who somehow tricked you into hitting like. Facebook works out what you want to see using a clever algorithm called Edgerank. What they’ve told the world is that edgerank figures out your relationship to all the elements that can possibly appear in your news feed using an algorithm that values how often you interact with the person/page, how many other people think their post is worth interacting with, and how recent the post is. If you’re a business (or person) and you have a bad social media strategy, where you post too much stuff that nobody cares about, pretty soon your stuff is pretty rarely going to hit the news feed and people will have to deliberately seek out your content. The stats on this are pretty appalling – most people like a Facebook page and never go back – which means they aren’t going to see your stuff very quickly, and any time and effort you’ve spent gathering a tribe of loyal followers is going down the drain.

This has implications for how you use Facebook if you’re interested in people seeing your stuff. Social media success, as far as the expensive social media consultants (or your cheap ones like me) are concerned, is about boosting interactions on your posts. This means posting stuff that encourages a response, posting really likeable stuff that people want to share, and trying to keep discussions going when they start. But that’s really hard, and takes time and effort, and there are plenty of businesses out there who have killed their edgerank by just not getting it (or knowing about it). So this promote post option offers a fresh start for businesses like that. It also gives businesses who do produce good content the opportunity to boost their edgerank – if what Facebook says about promoted posts is true (40% more interactions on promoted posts), then it is likely that the $5 hit, delivered a few times, will add value to your Facebook presence.

I’ll be using this option with a few of my clients, and factoring it in for a few of my content driven social marketing budgets. Because it takes a lot of the guess work out of using Facebook, and puts heaps more control back in the hands of page owners who have been dudded by the switch to Timeline (but that’s another story for another time).

I won’t be using it for my profile – partly because I don’t think it’s worth it, I have photos of a cute baby daughter to generate interactions. And the beauty of this is that once you’ve done it a few times, if you get a good response, you won’t have to keep doing it until Facebook inevitably reconfigures its EdgeRank algorithm.