Savvy user generated content is pretty much the holy grail of social marketing – or marketing of any sort – generating “buzz” also known as “word of mouth” also known as “having other people blow your trumpet for you” is the best, and most cost effective, way to spread the word about your product, cause, church, or company.

But boy can it go wrong. The Qantas Twitter fiasco is a testimony to that, as is the time Justin Bieber let people vote for where his next international tour would take him – the denizens of the Internet made sure North Korea topped the vote.

There have been a few funny campaigns like this in recent weeks, where the collective imagination, or hive mind, of the Internet has turned on a couple of campaigns – in the crosshairs, in the United States, weighing in as one of the biggest companies in the nation, is Walmart, but Australia is not immune to such frivolity, as Queensland Rail can attest.

Walmart ran a vote to sent a hip hop character known as the Pit Bull to any of its stores, well, the store that gained the biggest number of likes. Voters jumped on board to send him to the smallest, and most remote, Walmart in the country with a campaign called #ExilePitbull. At Kodiak Island. Somewhere in Alaska. Where Russia is visible from the sporting goods department. The campaign seems to have originated from a Boston website called The Phoenix.

Walmart embraced the result, so Pitbull is off to Kodiak Island.

Churchm.ag has a good little analysis of the Walmart situation as it pertains to social media marketing for churches. 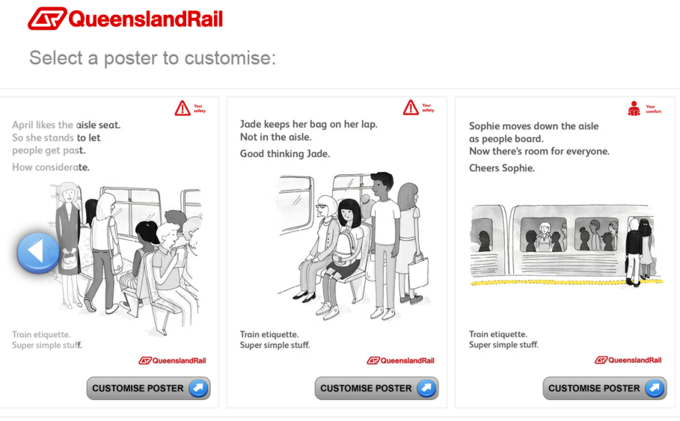 A couple of months ago QR launched a train etiquette campaign, where its online followers could generate, or customise, their own “Super Simple Stuff” campaign poster. The interwebs took over, many of the posters that resulted are far too crude to share, but it’s fair to say the campaign backfired.

Here’s a relatively tame example. Via Know Your Meme. 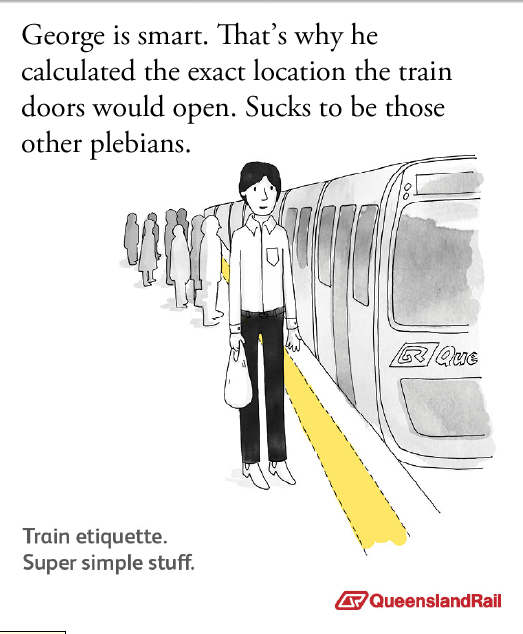 Queensland Rail responded pretty much the way they had to when the Courier Mail turned the campaign’s memeness into a story.

“The etiquette campaign has encouraged customers to be aware of their own behaviour and think about what is socially acceptable behaviour while on the City network,” he said.

“Since its launch in September 2011, our campaign has sparked a lot of interesting discussion on train etiquette faux pas.”

The third little example is slightly different – Shell Oil is facing a parody campaign, some environmentalists have created a page that looks very similar to Shell’s own website. The parody site gives people the chance to generate an ad that looks a lot like a Shell ad – and these have spread around the net.

Here’s the ad I just made.

Some “social media commentators” couldn’t tell the difference between satire and real life, and slammed Shell – who have been forced to be pretty gracious about the whole thing. This confusion was exactly what the campaign was designed to achieve. The campaign even involved setting up a fake Shell account to respond to the campaign…

That reaction highlights something interesting about playing in this sphere. If someone has it in for you online – like Greenpeace do with Shell – there’s not a whole lot you can do about it to come out a winner. The SMH piece has a few opposing perspectives on the issue…

“As an observer it would seem Greenpeace actually wants Shell to take legal action, which of course would draw even further attention to their campaign,” said McDonald.
“For Shell it’s the nightmare of juggling perception and reality and right now they are probably damned if they do, damned if they don’t.
“My only advice to Shell in this instance would be to suggest that they launch a fake Greenpeace site and laugh it off.”

“”It’s behaving, smelling, looking as though it was Shell under siege so the only way that you would ever know that it wasn’t Shell is through the Twitter ‘verified account’ but I know that a lot of brands haven’t gone through the verified account process.”
Gloria said she saw a real Shell “Let’s Go” banner advertisement on a US site that “looks identical” to the spoof Arctic Ready site.
She said Greenpeace had realised that it was much more effective to campaign online rather than appearing as “hippy do-gooders”. Why chain yourself to polar bears in the Arctic when you can create a fake Twitter page and do more damage?
Gloria criticised Shell’s response, saying it was behaving too “corporate” and not adequately responding to the campaign in the channels where the hijacking is occurring.
“They mistakenly believe they will give Greenpeace traction by ‘dignifying’ a response. Unfortunately the opposite is occurring – by not responding, Shell look corporate and out of touch,” she said.

I tend to sit somewhere between the two – Shell needs to do something funny and brand salvaging, in a voice the collective mind of the internet will appreciate, or it needs to issue a mea culpa on its practices and promise to change, and then actually deliver (a bit like Maccas have done with responding to rumours and criticisms about their burgers in Canada)… This is partly to do with having thought out a Crisis Communication Plan for social media stuff – which the books I reviewed last week touched on, and also with figuring out your “voice” or personality online so that you can respond accordingly.

Of the three situations, only Walmart has come out a winner, QR hasn’t been particularly damaged, but at the very least their campaign shows that not all publicity is good publicity, and the Shell situation surely demonstrates the utter foolishness of that idea – their brand is being hammered and laughed at, with no potential positive outcome, unless they think that motorists are more likely to think Shell when their “fuel empty” light flashes up on the dashboard on their next drive, and less likely to think about dying polar bears.

Will it Blend is the viral marketer’s dream. Who’d have thought getting the managing director of the company to blend…