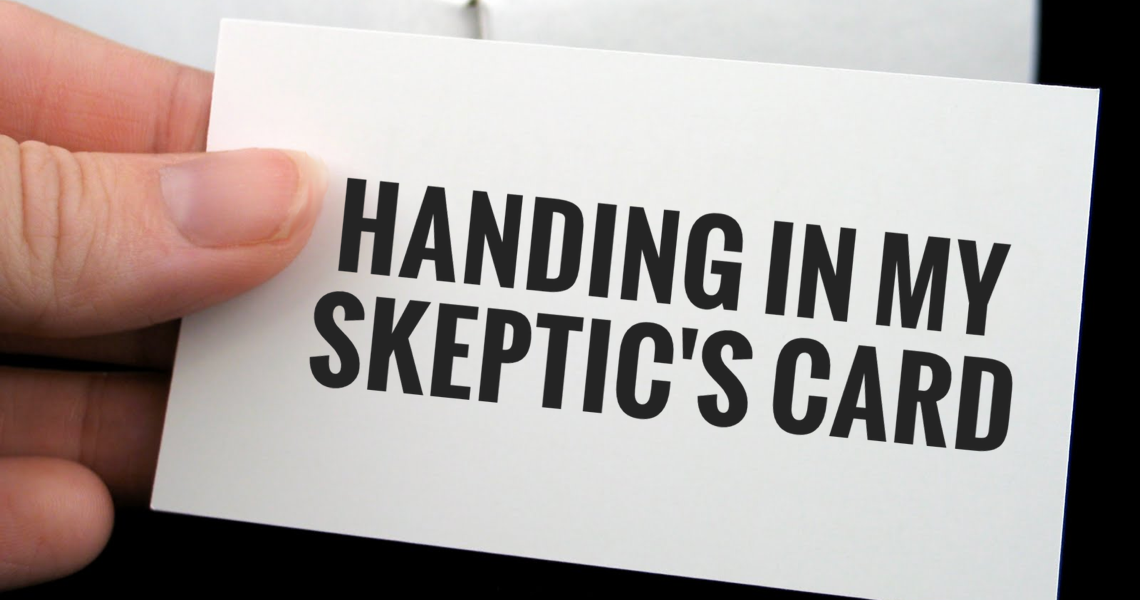 I’m not the skeptic I thought I was. Forgive me for a slightly self-indulgent post musing on how I think, but this has come as quite a shock to me. It might make a change from wading through umpteen thousand words about what I think…

I’m not a skeptic.

This may not surprise you, given that my day job is to convince people of the existence of a supernatural being who sent his supernatural son (a son who shares his being) into the world he made to die and be raised from the dead. Many people think this particular sort of belief in the supernatural defies skepticism because it defies evidence and seems unbelievable (so shouldn’t be believed). I am skeptical about this sort of blanket dismissal of a particular worldview and its approach to evidence. I am skeptical about skepticism. But the fact that I’m not a skeptic surprises me.

For a long time I have described myself as a skeptic. I’ve understood my approach to truth claims as skeptical. I have understood skepticism as a core part of my epistemology (how I seek to know stuff). I’ve seen this as completely consistent with my Christianity, which I still believe is reasonable and evidence based.

I’m not really announcing a massive change in how I think I know things, just how I describe myself, particularly when it comes to discussions about Christianity. I’ll no longer play the “I’m a skeptic too” card.

There are many varieties of skepticism, many definitions, some more technical than others. What I’m talking about is skepticism as wikipedia defines it.

“Skepticism is generally any questioning attitude towards knowledge, facts, or opinions/beliefs stated as facts, or doubt regarding claims that are taken for granted elsewhere. Philosophical skepticism is an overall approach that requires all information to be well supported by evidence.”

The bold bits are particularly what I’ve been coming to term with, mostly it’s about the optimistic posture I’ve found myself taking to truth claims and what I consider to be evidence that supports these truth claims. Some of the tools of skepticism still form part of how I piece together my view of the world – tools like critical thinking, rational thought, logic… I still employ these in my approach to new information. But one thing I’m dissatisfied with when it comes to skepticism is that it is so negative. I’m much more inclined to take bits of information and see how they integrate into what I already understand about the world than see each bit of information as something to be rejected, or, if it passes, placed alongside other things I have evidence for as another factoid.

I have come to realise is that skepticism does not excite me. It doesn’t light my fires. It’s not the posture I want to adopt towards learning about the world. It’s not how I want to position myself when it comes to people who come forward with new information that challenges my thinking. I don’t want my default to be doubt, I want it to be seeing if the thing will fly. If it will fit with what I understand about the world, if it will add colour, depth, and life. I’ll still reject stuff that is wacky and nonsense, but the approach to that rejection won’t begin in the same place. Which is weird. Realising this has been a bit of a paradigm shift for me.

Most people – skeptics included seek to organise the facts they accept into some sort of systematic view of the world. I’m not wanting to paint skepticism as holding to a bunch of disconnected facts without seeing how they fit together, but truly skeptical people must always doubt that they’ve got the fit right. They must question both the merit of a particular fact, and, simultaneously, the merit of the frame they try to use to hold it.

I’ve decided that for me, a systematic view of the world actually helps me organise and accept facts. And I’ve decided I’m committed to many approaches to new data prior to applying the skeptical approach to the world. So I can’t call myself a skeptic. It turns out, the system by which I organise new information has been there all along – it’s been how I identify myself all along. It’s my faith. My belief that the world is best explained when the God who made it is present. This system guides my presuppositions, but not because the system tells me it should. I don’t think. I think I have good reasons to go with Christianity as the organising idea on philosophical, aesthetic, logical, and evidentiary grounds. I am skeptical about other organising ideas having the same explanatory power as Christianity.  But to be frank, even if I think I chose the system through a skeptical approach based on evidence, I can’t escape the truth that given my upbringing Christianity is something like the default for me – so I have to keep exploring the possibility that other options will do it better. The way to assess this is how well a particular view integrates all the available data, the facts about the workings of the world, that I have come across and been convinced are true.

This isn’t skepticism. It’s freeing to admit this.

New facts don’t force me to toss out the system, but they will shape how I understand the workings of this system. I like this description, again from wikipedia, of ‘Knowledge Integration‘… this strikes me as much more fun, stimulating, and worthwhile. It also describes my intuitive approach to thinking about stuff much better than boring old skepticism.

I want to know stuff. I want to see how all the different streams of information, all the different facts, all the different fields of scholarship – from philosophy, to science, to the arts, to theology, can be integrated in a coherent and exciting way. One of these fields of knowledge has to provide the organising framework for the others. I think that’s just how it works. For me, this is theology – Christian theology – it helps me make sense of the world. As CS Lewis says:

“I believe in Christianity as I believe that the sun has risen: not only because I see it, but because by it I see everything else.”

I’ll stick with Christianity until I find a better look out point from which to view the world (and I’ll continue to allow my presuppositions to be challenged, though I admit to finding the intricacies and aesthetics of Christianity quite compelling). I’m probably too far gone. I just don’t know what other system accommodates and explains the Jesus event, and the emergence of Christianity post-crucifixion with the same power as Christianity. I think Christianity offers the best explanation of world history, the human condition, and our ability to do science and know anything as real. I think Christianity is the most coherent philosophical and ethical framework. I think the Bible’s story, centred on Jesus, is, aesthetically speaking, the best narrative to live by. But I’m open to other ideas.