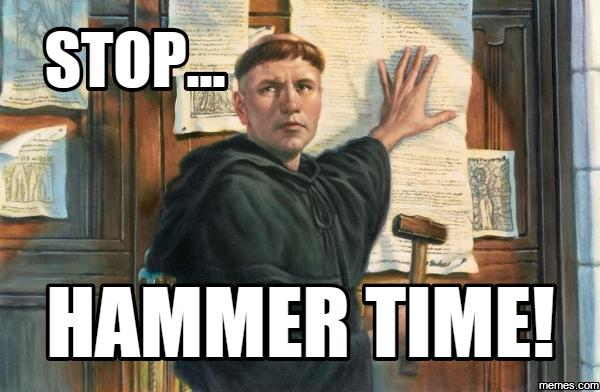 On this day 499 years ago, the reformer Martin Luther nailed his famous 95 Theses to a church door in Wittenberg. I don’t know why he chose a crass, commercialised American holiday to do this; especially because America as we know it hadn’t been invented yet, but he did.

Luther put forward his theses to invite debate from his colleagues within the church; a church he loved and served and wanted to see grow. This wasn’t an act of rebellion, though we’ve recast it that way since, because he certainly ended up being treated like a rebel; it was an attempt at reformation of the institution he loved.

Lots of protestants, especially reformed protestants, are trying to mark the 500th year in special ways, my senior pastor Steve Cree has had a crack on our church’s blog, in a post I think is provocative and worth reading.

I’m a Presbyterian Minister, which places me firmly in the Reformed Evangelical tradition; I’ve been deeply influenced by the Australian Fellowship of Evangelical Students, by the ethos of the Sydney Anglican scene (largely through ministers trained at Moore College), and was educated at Queensland Theological College.

I’ve been reflecting on what got me to where I am, and what I’m thankful for when it comes to my heritage, but also on where I think things are going wrong for us as the church in Australia, and where we (these circles and how they’ve shaped me) might be contributing to that. I’m not trying to downplay God’s sovereignty in the mess we find ourselves in, but the church is not succeeding, broadly speaking, in reaching Australia, and even the reformed evangelical stream of the church which seems to record very modest growth while the liberal church shrinks is not growing at the same pace as the population. We need to ask some questions about what we’re doing wrong; and what we might do better; and so, channeling Luther, here are my theses on some of the issues. There are some institutions and churches already operating as counter-examples to the status quo and showing what a way forward might look like, so if you don’t think these apply to you, then maybe they don’t.

I’d love to hear yours… I’m also happy to defend any of these in the comments.

Thesis 2. In focusing on the doctrine of penal substitutionary atonement (which is absolutely true), we’ve downplayed the other aspects of the Cross; the example, the victory, the establishment of the rule of Jesus and the peace he came to bring.

Thesis 3. We’ve tended to kill paradoxes in pursuit of clarity and pragmatic decisions rather than wrestling with them and living in tension and mystery.

Thesis 4. We’ve been confused about the ‘sacred’ and the ‘secular’ and so have an anaemic doctrine of creation, and a poor theology of work…  especially when it comes to what ministry of the kingdom looks like; such that evangelism/proclamation has become the thing we push gifted Christians towards. As a quick example; I was president of our AFES group but not attending class and barely passing; we should push our university students to being excellent contributors in all sorts of industries; particularly, if Christians are going to be excluded from secular establishments (like health and education systems) we should be fostering resilient and imaginative entrepreneurs who will work for the good of their neighbours as a witness, but also be able to make a robust Christian case within a professional field).

Thesis 5. We’ve misunderstood worship and liturgy as being exclusively a Sunday thing; either about music or the sacraments; or not a Sunday thing at all but all of life; and both poles have involved reactive over-corrections against the other; and so we’ve downplayed idolatry and its significance.

Thesis 7. We’ve turned ‘scripture alone’ into ‘literacy alone’ and so excluded or marginalised those who are unable to read; or who don’t want to. Our churches tend to be white, or to assume that Christian culture looks like ‘white culture’ for people from other backgrounds, such that we’ve even created homogenous churches for other ethnicities.

Thesis 8. We’ve individualised salvation and so individualised the journey of the Christian life (think the Footprints poem, we should see our sandy beach as littered with the footprints of other people journeying with us and helping us through trials as God’s agents in our lives, and we should be that for each other).

Thesis 9. We haven’t been clear enough or persuasive enough about how to read and understand the Bible as centred on Jesus in a way that will help Christians engage with strange Old Testament passages and the way they are used in public debate by both Christians and non-Christians. We haven’t provided a robust enough safeguard against a hermeneutic of ‘feelings’…

Thesis 10. We have killed the priest as mediator when it comes to confession, but still see ‘preaching’ as a priestly function to the body, not on behalf of the body to the world. We also see preaching as a monologue by one very educated person.

Thesis 11. We see church as a Sunday gathering, and the gathering as being largely for believers and their edification, rather than being an opportunity for believers to love one another and proclaim the Gospel of Jesus to their particular place, reflecting a community that exists all week.

Thesis 12. What we do when we gather, and the disciplines we call people to adopt during the week in pursuit of their spiritual growth tend to be the product of a particular personality type (often the modernist engineer type, usually the minister). We are suspicious of the emotions, and the imagination, and practices that are embodied or tactile (we’re suspicious of physical responses to music, but this also includes a view or practice of the sacraments that is sometimes totally devoid of significance, beauty or mystery). This leads to the danger that we are making disciples in our image, and making being part of the church, spirituality, and discipleship less plausible for people not like us.

Thesis 13. We’ve believed the plausibility of Christianity rests in good arguments rather than in loving community that imitates Christ (and makes good arguments). The love of Christians for one another is what makes the Gospel plausible.

Thesis 14. We are not very good listeners so fail to diagnose and engage with the problems of the world around us. We especially tend to mostly read people we already agree with who reinforce our views, rather than listening to other people who share our theological convictions from history, or globally, and assessing our practices in response.

Thesis 15. We don’t make very good media; and our use of new media seems to be geared towards reinforcing our circle, not growing it (which would arguably be more bracing for us).

Thesis 16. Our imaginations have largely failed us when it comes to public Christianity; we tend to see solutions to moral issues as being political, and have tended to play the political game on the basis of power and natural law arguments, rather than faithfully articulating our Gospel-soaked alternative in a way that positions the church as an alternative political reality to the world.

Thesis 17. We haven’t really grappled with what it looks like to be joyful optimists who trust in God’s sovereignty through our struggles; and so have failed to be adventurous.

Thesis 18. As a corollary to the last point; we’ve not yet charted a way forward where we actually function as exiles in the post-Christian wilderness, or fully grasped what it looks like to live in a pluralist and secular democracy. This relates in an interesting way to Thesis 16 as well.

Thesis 19. We tend to make change very difficult because we want to conserve our theological distinctives (the stuff the reformers fought for); but that means we’ve held on too tightly to practical things that aren’t working or aren’t right.

Thesis 20. We’ve been too interested in protecting our place in society and our political and social influence to be reaching those who society marginalises (our typically middle class, educated, whiteness is a result of many of the above points too).

Thesis 21. Our disenchanted view of the world; a product of many of the above; means we frame our lives in the world as something other than a fight against Satan and the idols and lies he uses to lure us away from God and to death; it also robs us of the practices and vocabulary that might see us doing something significant to fight against those for our sake and the sake of our neighbours. Instead, we treat life as a battle to think the right things.

Thesis 22. Our ownership of exclusive and expensive church schools that aren’t really preparing the next generation of Christians for engagement in a post-Christian world will be to our shame. The sort of education we provide should be accessible and excellent; fostering the imagination, training in virtue via example and the formation of habits, cultivating desires that run counter to our culture, helping people understand the world and a flourishing life in it (probably via the Liberal Arts), and teaching people to view life in Christ as an adventure. The schools that do this are too expensive, and the Christian schools that are cheap don’t do this.

Bonus 5. That I thought were equally, if not more important, than the above.

Thesis 23. We’ve somehow created church decision making processes that don’t really give 50% of the church an opportunity to be involved with the making of decisions as though authority rests in decision making of a bunch of priestly types. Particularly for the Presbyterians the decisions made in our ‘courts’ include a bunch of stuff that has nothing to do with eldership even if eldership is what we think it is; that we think this is what the Bible has in view as the way leadership or gender roles play out in the church seems to me to be a total failure to imagine how the Gospel starts unravelling the impact of the curse on relationships between men and women; and a failure to re-capture the meaning of ‘helper’ in Genesis 2 as ‘necessary ally’ and to recognise the way God uses the spoken wisdom of women to leaders to help direct his plans in the world through the Bible (and the way Proverbs depicts wisdom as ‘lady wisdom’…).

Thesis 24.  We’ve imported worldly understandings of leadership and authority into the church; and into how we appoint and identify leaders; and what we expect from them.

Thesis 25. Our expectations of the clergy, and of ourselves as clergy, are unrealistic and reinforce a weird priestly view of ministry.

Thesis 26. As Christians we’ve bought into the trap of measuring success, or fruitfulness, by productivity and so doomed ourselves to being busy and perpetuating many of the problems facing our neighbours within the church.

Thesis 27. We’re inadequately prepared, theologically or practically, for dealing with the rise of mental health issues in part caused by life in the world as it now is; including, amongst other things the impacts of pornography, social media, and the changing pattern of media consumption that all fuel our culture’s rampant individualism, and create disconnection rather than connection between people.

This is a long post. Be warned. Discussion on Simone’s blog has evolved in an interesting direction. And one I’ve…