I have a friend who keeps giving telemarketers my number. His name is Joe. He thinks it’s funny when they call me, expecting an easy sale, and I run my standard anti-telemarketer ritual of talking for a minute and then just staying silent.

I decided it was about time I got him back.

My problem with prank calls is that I always laugh in the middle of them. I needed someone else to do my dirty work. So, like every other Australian male who needs a little bit of spring in his step, I turned to the Australian Medical Institute. And they called him for me. You can click the image for a larger version. 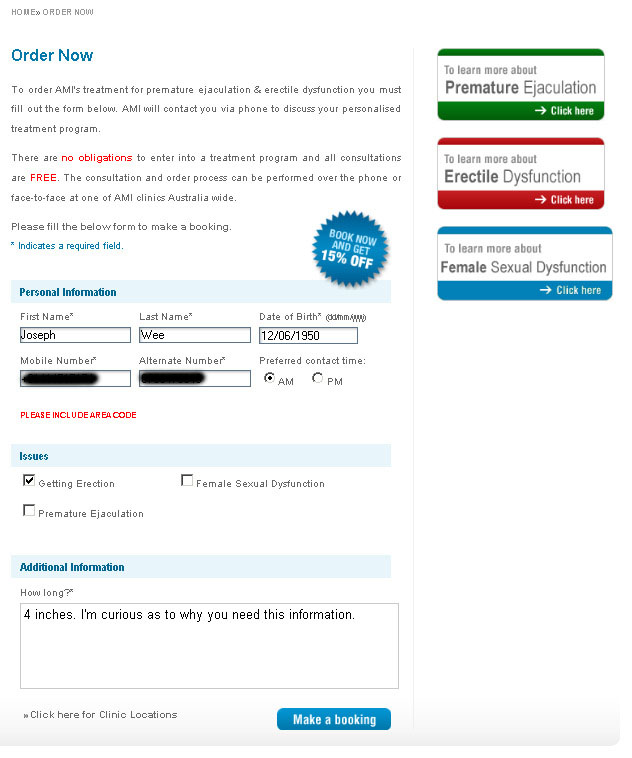 I highly recommend this course of action, partly because I’m sick of being inundated with AMI ads, and because it’s free.

I don’t really have anything significant to blog about today. Or in fact ever. But I need to write a post to draw your attention to the fact that Mr Joseph Y Wee has entered the “blogosphere” with style. I am sure Joe’s blog will be a worthy read. Here’s what he has to say about the site:

“Fundamentally this blog will be about the things that I enjoy. Cruelty to animals, George W Bush, and economic imperialism. I will occasionally dabble in other interesting topics such as decoupage and other arts and crafts.”

Please hesitate to make your way over to Joe’s site. I’m sure you’ll be mildly appalled.

In other news, Kevin Rudd was in Townsville yesterday, and in fact, in our office. His hair is very grey. Almost white.

I hope you all had great fun watching the Federal Budget last night. Didn’t Peter Costello look dapper in his Sunday (or Tuesday) best – he was wearing a particularly spiffy stripey tie. He’s way too trendy to be a real Prime Ministerial candidate. I think Tony Abbott with his unfashionable satellite dish ears, and slightly elf like chin, is a much more realistic candidate. If you throw the “here’s my adopted-out non-son” nonsense into the mix he’s got the whole public sympathy thing happening too. Clearly that’s how John Howard got elected. Everyone felt sorry for the little man. I had a budget party by myself last night. How sad is that. I also installed a new hard drive in my computer and almost killed it. So I’m a nerd and a geek.

Today’s theory is that economists are the strangest people in the world – I base this theory on my two economist friends – Ben and Joe. Some of you will know both Ben and Joe, others will know one or the other, some of you will know neither. Suffice to say (that’s a grammatically incorrect figure of speech if ever I’ve seen one – there really should be an it’s before the Suffice, but that’s not how it works*)- they’re both weird. Anyway, I got a post budget email from Ben asking me what my opinion is on the government’s subsidy of childcare places – he’s not sure non-parents should be carrying the can for those who choose to reproduce. Here’s my response – copied directly from the email:

“On childcare – the reality is children are the future of our country, and a valuable resource that should be invested in. I think there are two ways to look at it – the government could provide financial assistance for parents who choose to stay at home and look after their children (meaning that childcare wouldn’t need to be such an issue) – essentially they do this with family allowance – but it could be a greater counter childcare incentive.
On the socio-economic side of things – it stands to reason that genetically some people will have more intelligent children than others – it worries me that “smart” people are increasingly choosing not to breed – and dumb people aren’t caring for and nurturing their children like smart people would – I think this will be a problem. On an interesting side note – there’s an economist who has tied decreasing crime stats in the US with the introduction of abortion – he’s that popular economist guy who writes those books. ”

Ben’s response used an analogy of a soccer coach who only invests in youth being narrow minded and not particularly likely to experience short term success.

“There’s no point spending lots of money on encouraging today’s generation to make as much money as possible if they’re going to die out – except that they’ll leave no heirs and the government will get the money. That’s an interesting form of investment – but the people the money will benefit in the long term will be children from broken homes, who have been educated through a crappy state system because they can’t afford private education and who have parents who haven’t been able to bring them up properly because they’re working to be able to buy their plasma screen TVs and luxury items.

By the same token – the parents with good jobs who work to put their kids through child care and pay for their plasma televisions will decide that economically it makes more sense not to have kids to begin with so they can buy bigger TVs and both work to make their lives more comfortable.

Inherent human selfishness will be the death of our society – the more self sufficient individuals society creates the smaller society becomes – those individuals become their own society and then die off. It’s a poor economic model – which is why children are our future – and it’s why Costello called for people to take one for the team and breed.

A good coach finds the right mixture of youth and experience (Chelsea – Robben and co, Crespo) a bad coach buys a bunch of guys who are in, or passing their prime (Real Madrid – Zidane, Figo etc) or invests only in youth and loses all their experience (I’d put Ferguson in that category at the moment, releasing experience in Beckham, Keane, et al and bringing in Christiano Ronaldo and Wayne Rooney).”

That’s the sort of thing I talk about with my strange friends. It’s pseudo-intellectual I guess, and very self serving (some rude people might say it’s a load of wank – but I’m not rude).

Now that I earn an income I say yay for tax cuts… and I’ll leave you with this asterixed point to check out.

*Sidenote on the English language – Micallef does this sketch as an arts critic filling in for a sports journo in a post match interview with a footballer who says “it all goes well for the finals” when of course the sports star should have said “it augers well” or “all bodes well” – his point was remade by the SMH a couple of weeks ago in an article highlighting the highjacking of language by our culture of stupidity. Read it here.