And a music video…

And who can forget their take on Rebecca Black’s Friday…

This song is awful. Just awful. Many people are calling it the worst song in the world (Dave Miers isn’t). I wish Autotune technology would become sentient and eat all the awful autotuners out there. And Justin Bieber. That’s a singularity I could get behind.

But the story behind this story (the music video has had more than 27 million hits and the single is roaring up the charts on iTunes), is that this 13 year old girl’s parents paid a company (Ark Music Factory – here’s Rebecca Black’s Profile on their website) $2,000 to make a viral video. That’s $2,000 well spent. Except for all the hate. TechCrunch’s wrap up of the viral side of the story is worth a read. Gawker’s coverage is also pretty good (here’s another, and a story about the company behind the video), and here’s a C-Net wrap up.

Now, if only the Old Spice man would weigh in on a Bieber/Black duet we’d have some sort of viral perfection.

My wife is pretty against things posted online that start with “my wife is” and end with a husband spamming the world about how awesome their wife is. We get it. You love your wife and she is awesome. That’s great. It’s why you’re married.

But my wife is going to see Justin Bieber’s 3D movie. She doesn’t know it yet. But that’s her punishment for signing me up to receive Justin Bieber’s ever popular twitter feed in my Google Reader. She’s funny, but this joke may have backfired. 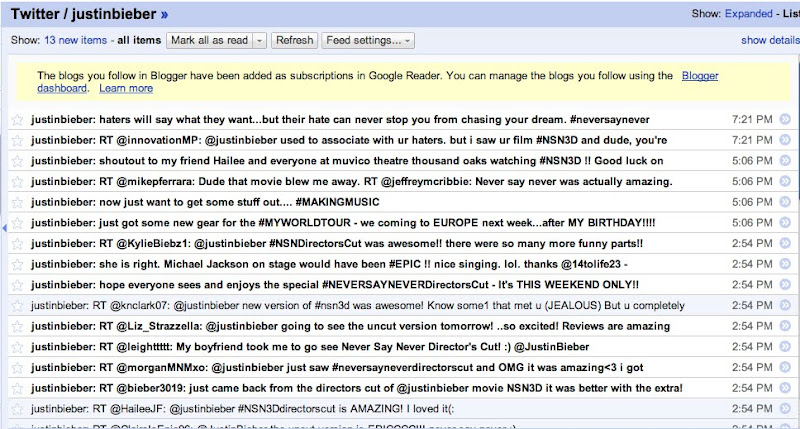 She loves a little bit of Justin. She sings his hit song that goes “Baby, Baby, Baby Oh” when she thinks I’m not listening. She’s been looking forward to the movie for a while. I have a photo to prove it. 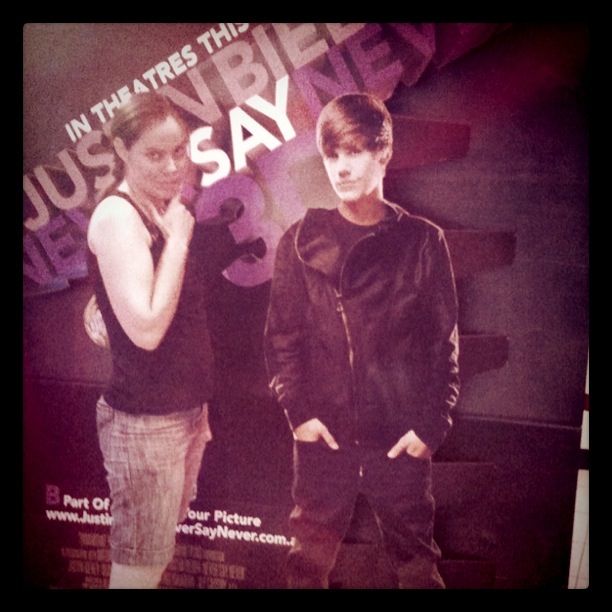 My wife is funny. And hot. We’re going to plant a mega church. Justin Bieber will be our “Worship Director”…

Steven Anderson likes to say controversial things to get attention. It works. Here’s his take on Bieber Fever.

It’s pretty much all because the NIV translators use the word “male” instead of “men”… and being effeminate is a sin. See 1 Corinthians 6:9. In the KJV because that’s Anderson’s preferred version.

” 9Know ye not that the unrighteous shall not inherit the kingdom of God? Be not deceived: neither fornicators, nor idolaters, nor adulterers, nor effeminate, nor abusers of themselves with mankind,

10Nor thieves, nor covetous, nor drunkards, nor revilers, nor extortioners, shall inherit the kingdom of God.”

I suspect, given the Roman cultural context of the passage, there may actually be some homosexual undertones to this word (certainly there’s reference to that in the ESV translation notes). The ESV translates it as:

Once you’ve jumped on the meterosexual hating bandwagon – here’s how to doorknock… I love the way he listens. How many can you take down?

Apparently, if you slow Justin Bieber down to 12.5% speed he sounds a lot like ambient avante garde noise act Sigur Ros. Who have considerably more social cachet.

But it doesn’t work in reverse.

Like many Australian males over the age of 15, the first time I heard of Justin Bieber was when he caused a riot in Sydney. I haven’t heard his actual song. The one that apparently goes “baby, baby, baby, oh” – but I read the lyrics online somewhere. They didn’t sound very intelligent. Which is why I can’t see how these two adolescents (or adults) thought it was a good idea to dub “Jesus, Jesus, Jesus, oh” over the top of the lyrics, while dancing badly. And I certainly can’t see how they thought it was a good idea to then put their handiwork on YouTube.