Right. I’ve been meaning to put some thoughts into writing for a few weeks. Doing so now was prompted by a possibly throw away line in the Q&A at the Moore College School of Theology as collated by my friend Kutz. I wasn’t there. But this line resonates with a position I’ve been trying to articulate lately (the line is from Peter Bolt):

“Manipulation can be positive. If you’re doing it to align people to the word of God then it’s a good thing.”

Manipulation and persuasion are essentially seeking to do the same thing – move a person from point a to point b. So what’s the difference? I’ve settled on this distinction…

Persuasion is the transparent act where two parties enter a dialogue with one hoping to move the other from point a to point b.

Manipulation is less transparent and involves one party trying to shift another party from point a to point b, probably without their knowledge.

I’ve settled on this because in my experience if you catch somebody trying to shift your position when they haven’t told you that’s what they’re doing you feel annoyed and accuse them of “manipulating” you, where manipulating is a pejorative. There are heaps of ways to manipulate, and most of them fall outside the classical tools of persuasion – pathos (emotions), logos (facts and words), and ethos (how you act/live). Tools of manipulation tend to involve tugging really hard on one of those threads, where persuasion is a more subtle movement, kind of like a puppeteer with a marionette.

I reckon manipulation is fine. I know we hate it. But it’s a great art, until you get caught. Like pickpocketing, not Oliver Twist style, but like the TV guy who takes your watch while you’re talking to you and then gives it to you later. Manipulation, honest manipulation, probably involves pointing out what you’ve achieved to the person after the fact, so they recognise they’ve moved from point a to point b, but during the process your mark should be a bit like the proverbial frog in a gradually heating pot of water…

This all came up, for me, when I was told I needed to engage a little more with the emotions when I preach (because I’m a pretty rational/stoic type of thinker). So the summaries of the Moore College Lectures on Kutz’s blog have been interesting. I react against this suggestion, not because I think tugging on the emotions is “manipulation” as though that’s a bad thing, but because I think I’m more likely to get caught out if I’m doing something that isn’t within my normal character. I’m all for subtle chord changes, a little bit of emotive muzak in a movie, and all the other little “manipulative” tools – I’m also for putting a bit of emotion into a sermon, like a tear jerking illustration, I’m just against doing it in a way that means I’m likely to get caught.

Persuasion is pretty safe ground, but doing both is potentially more effective, I’m just not sure what that looks like. Most people in the pews are there hoping to be persuaded (or taught), so there’s implied consent there for being “manipulated,” providing your end point is something you’ve implicitly agreed to (essentially the ends identified by Peter Bolt in his quote). It’s a little murkier when it comes to PR and marketing, but manipulation is where the fun is. It’s making ads that are more than just a boring presentation of a product, it’s also harder to do thanks to the Gruen Transfer and market awareness about the tools advertisers employ. Anyway. Those are my thoughts. What are yours?

Simone wrote about a post church conversation last night (in real life) that was a continuation of a couple of posts from Simone and Kutz (part one), (part two). I’ve spent today trying to articulate my position on sin. It’s not like Simone’s (looking to the new creation to resolve sinful desires) nor is it like Kutz’s (looking to the original created order to salvage the good thing that sin twists). I don’t tend to analyse my sin. I find that can be pretty crippling.

Here are some of my thoughts about sin in list form…

If you are a preacher of mercy, do not preach an imaginary but the true mercy. If the mercy is true, you must therefore bear the true, not an imaginary sin. God does not save those who are only imaginary sinners. Be a sinner, and let your sins be strong, but let your trust in Christ be stronger, and rejoice in Christ who is the victor over sin, death, and the world. We will commit sins while we are here, for this life is not a place where justice resides. We, however, says Peter (2. Peter 3:13) are looking forward to a new heaven and a new earth where justice will reign. It suffices that through God’s glory we have recognized the Lamb who takes away the sin of the world. No sin can separate us from Him, even if we were to kill or commit adultery thousands of times each day. Do you think such an exalted Lamb paid merely a small price with a meager sacrifice for our sins? Pray hard for you are quite a sinner.

Gary Millar came, he talked, he conquered. We all now want to be deep thinking Irish men who love preaching the gospel.

He is a man greatly gifted by God as both a thinker and a pastoral worker. He shared some insights into some of the trials he has faced in ministry that would send a mere mortal crazy. He has been around the block a few times and he is still faithfully toiling for the sake of the gospel – and still making sure that he preaches the good news of Christ crucified week in, week out, despite the opposition.

In the interest of providing a nice resource for posterity here is a summary of all the posts that I have read reviewing his time at QTC.

Night One – Song of Songs

Of all the people in all the blogosphere Kutz is the only person I have lived with in Brisbane. Tim also blogs, and Mattias used to. I also work with Kutz. And go to the same college. And we play futsal together, and very soon we’ll play football together.

For a guy who almost staged a coup on my only claim to presidential authority (QUT Christians in 2005) we get on surprisingly well and spend a lot of time together. Kutz is a deep thinker, who I think sometimes thinks so deeply he gets lost in his own thoughts while trying to articulate them. Lots of people know Kutz – both online and in the real world. His two greatest personal achievements are convincing his wife to marry him and playing international roller hockey – that’s my assessment not his. How many sporting internationals do you know? I can count them on two fingers. While the cynics out there might think that picking an obscure sport to play is kind of cheating – Roller Hockey is hard core (I watched a tournament once) and Kutz was a standout.

Anyway, here are his tips on how to be awesome at Roller Hockey. He gets extra points for diagrams – though I suspect he was making them when he should have been writing a sermon.

I’m Kutz and I’m an ex roller hockey player. Hoquei em patines, for those Spaniards among you.

Roller hockey is awesome. You take 5 steps, and then all of a sudden you’re already going fast. Seriously. You don’t need to keep running. You just roll. Your legs are still. And yet you’re still going fast. A beautiful concept. Add to this the feeling of smashing someone into the wall, flicking a ball into the top corner (probably on the keeper’s stick-side) and getting to hit a ball (and, on occassion, other people) with a stick and how can you go wrong? 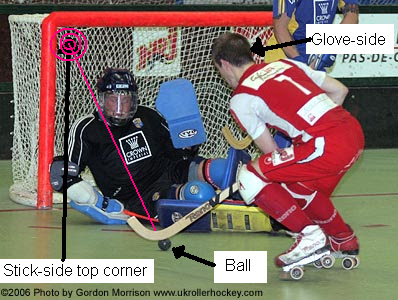 Now, I used to play with a team of guys: Michael, Les, Dion, Matty, Serge (my bro), Chris, Peter and some others.

Fun rules they were too. They aren’t, however, mine.

My Five best* tips for playing roller hockey. (And these are genuine, and hence will interest only a very few of you.) (They will also mostly be team, not individual, principles. That’s because that’s all my dad taught me.)

Nathan’s asked me to tell you now how applying these 5 tips will change your life. I would suggest that after intense thought and application these principles will simply confuse you if you try to use them while learning to play hockey. Our coach Eduard Karayan (ex-pro in Italian league) just let us go and have fun. So we did. :)

Over at Ben’s blog during the inimitable Monday Quiz your host, Ben, asked a question about reoccuring dreams.

Kutz admitted to having a dream about a randomly appearing head that would pop up all over his parent’s home. Freaky. What’s freakier is that people all over the world report seeing the same man in their dreams. This man. Have you seen this man? If you have you should check out that website. Ah, another week, another post chock full of links from the narrow sector of the world wide that I like to call the blogosphere.

I thought I’d get a little bit geographically specific with this little link edition. Just to give you an idea of the spread of blogs that I read (that you should too). This is by no means comprehensive – but here are some of the homes of regular commenters, people I know, and people I reckon you should discover (along with some choice posts from their sites).

Starting with those in my own neck of the woods – the Townsville scene… (in no particular order).

If you’re in Townsville, and I’ve missed you, let me know in the comments.

Moving south, here are some of the notables in Brisbane…

Now, on to Sydney. The city of my birth and home of many good blogs.

Mikey (from Tasmania) was also the second person to, somewhat vicariously, mention dad this week because his name came up in one of the posts from the aforementioned series of interviews.

It has also become apparent – from what Andrew Heard said on Dave’s blog and what Al Stewart said on Mikey’s – that the Geneva portmanteau was only a vicious rumour, and that the name is actually a reference to Calvin’s work in that city. Which is a good thing.

And to conclude, here are my favourite ten posts from my blog this week (including bits from Robyn and Benny).

* I should point out that these constant mentions of dad being mentioned are a mixture of patri-pride and because I think it’s slightly funny that he feels a sense of discomfort about being in the spotlight. It’s not because I think he’s super special (though he is). And if you want to join the fan club here’s the video I made for his 50th.

Slowly and surely the people I know who I think should have blogs are starting blogs. And why not? Blogging is great. First there was Izaac. He’s been going strong for a couple of months, and he’s well worth a read. Then I managed to coax my sister Maddie into writing occasionally here.

Now my long time philosophical sparring partner, former housemate, good friend, and potential future workmate Kutz has started a blog. He did ask me not to mention this, but that was a week ago, and he’s since published it to his myriad friends on Facebook. So here’s the link. He’s opened with a worthy contribution to the conversation about country ministry and where people should go. There’s a bit of meaty stuff already, and I’d expect more of the same. Now if only Dave Walker would start a blog…
Scroll to Top