This week is turning out to be very interesting.

First up, the Traveston Crossing Dam is no more. A rather belated move by Peter Garrett destroys his Labor counterparts plans. The Courier mail contains good coverage of the issue today, and highlights some very interesting points.

I don’t like Anna Bligh much. I didn’t like her much prior to her becoming Premier, but I decided to give her a chance and a clean slate. She has failed miserably in pretty much all respects.

However, she did have a tremendous task in front of her. She inherited a government that had spent up in the good times and left little for the bad, a SEQ grappling with water issues, a tarnished health sector, oncoming infrastructure problems (that many foresaw were approaching, but the past Labor government did little to avoid), and, it has to be said, a not overly sparkling bunch of MPs around her. So, it could be said, the previous Premier Peter Beattie bowed out just before his legacy took its crippling hold on the State.

It was nice though of Garrett to wait so long to enter the fold here. Good decisiveness by the Federal Government, who took the best part of two years to make a real stand against a project that has impacted so many people. Still, the move will probably win them further accolades as the saviours of the area. Maybe they were holding off so they didn’t impact Bligh’s chances, but then when they realised Bligh was too far gone, and there was no point trying to save a fellow party member if they are going to lose anyway, they may as well do something. It would be interesting to find out what happened behind the scenes there.

Still, Bligh has yet to display any real propensity for the job. She managed to introduce flouride, which was generally well received though controversial, and begin some water projects (all of which have so far had far more failings than successes). Many attacked her media profile, but I think this is a bit of a meh point. In today’s world of governance, public exposure is important. She used her leave for Master Chef, so while it was arguably a dumb move, it wasn’t exactly a decision deserving of major criticism.

Further into today’s Courier, the new Family (Surrogacy) Bill has gotten some coverage. Not content with the (very poorly written) article, I went and found the Bill. Indeed, section 9 (2) of the Bill provides eligible couples to only include married couples or mixed gender de factos. Springborg apparently has said the Bill is designed for hetrosexual couples only. So it might be a bit hopeful to suggest the language of the Bill almost sounds like it would be open in the future to providing surrogacy to all types of married couples (depending on who was defined as ‘married’). So, depending how you feel about surrogacy, this is at least a step forward. But, while making the step, there is also a bit of throwing the leg out and tripping some people over. It seems the LNP is adhering to its more conservative members on this one.

Which leads on to the next interesting happening. Senator Sarah Hanson-Young of the Greens has introduced a Bill to allow same-gender marriage. High fives all round Sarah Hanson-Young. So it seems there is one awesome Green. But then she goes on and says this:

“I’m calling for the prime minister to … grant his members a conscience vote so we can get a true reflection of how the Australian community is feeling.”

Pfft. A conscience vote has no chance of reflecting how the Australian community is feeling. 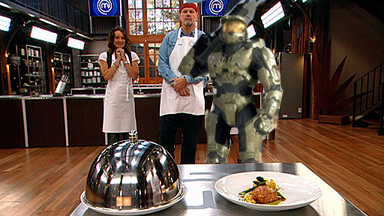 I made that little picture myself. I thought it would’ve been done to death, but I found no evidence of that online…

Did everyone catch Anna Bligh on celebrity Master Chef last night. What a laff. Queensland produce was centre stage… right up until the second ad break. When the Queensland LNP took out a sixty second (I think) ad calling the Labor Party a pack of liars – with a nice, intense close up of a nice, intense looking Anna Bligh.

Unfortunately they couldn’t really capitalise on their ad. The call to action was the LNP website – sadly it seems to have been hacked. If you google LNP google gives you all sorts of warnings about the site not being safe. And you eventually get to an LNP holding page announcing maintenance.

Here is the graphical evidence…

Premier Bligh has decided to scrap the 8c a litre fuel subsidy. I don’t really care. Anything the government is subsidising is being paid for by us (the tax payer) anyway. So it seems that I’ll get taxed less and have more money to spend on the things that go up in price. Balance. Plus, there have been a number of price hikes in recent years to cover increased fuel costs – and I haven’t noticed decreases to cover the drop in fuel prices since. So it should all just work itself out.

That’s what I think anyway. I wonder why all the lobby groups in the world are up in arms about increased costs when we’re still about 22c ahead of where we were six months ago. I tried to make our line on the issue consistent with my thinking – but keeping the customers (the tourism industry wants the subsidy) satisfied won the day. Oh well. More fool them.

Your thoughts in the comments – is the scarcity of political talent around an indication of market failure and a justification for closing down State Governments?

I think so. The Labor Party is so desparate to fill out all the seats around Queensland they’ve picked a Brisbane uni student to run in Hinchinbrook who won’t do recorded interviews with the ABC – the Premier had to chastise him via the media.

But the problem is widespread – NSW isn’t much better. The downside of abolishing the states would be State of Origin would lose its significance without the premiers being able to make their annual wagers.

The latest roundof election ads are out – the ALP has gone negative. They’re telling us that despite poll results the other guy – Lawrence Springborg – is not ready to lead us.

Labor seems concerned. Government media releases (still being sent via Government distribution lists despite “caretaker mode” being in full swing) are consistently refering to the LNP as the Nationals.

Springborg on the other hand is trying to claim the “change” mantra. I just saw an ad that pretty much ran with the “time for a change” motto.

LNP: B+:  change + positivity + pointing at debt as an indicator of bad economic management are winners as we’ve seen in other elections (for example the US Presidential Election and last Townsville City Council election).

ALP: C+: Uninspired rhetoric – except perhaps the ad where Anna Bligh acknowledges that a deficit is needed to fight recession. Brave. Also somewhat reckless in the face of poll results and the LNP’s relentless use of debt as a campaign issue.

In other news – we are running a campaign on our website that emails candidates with respondents feelings on the Flinders Street Mall within a form letter. Clever hey. But Labor had the email addresses for Mandy Johnstone and Lindy Nelson-Carr wrong on their campaign page. They don’t even know how to spell Johnstone’s surname. Fail. D-.

The Labor Party is telling us we can’t trust Springborg because a couple of months ago he said the current economic climate was not like the Great Depression. That it was different.

The ad runs a bunch of clips from world leaders (Obama, Rudd, and Brown) telling us what a crisis this is, and comparing the situation with the Great Depression.

So, was Springborg wrong for saying it’s not? No.

Here’s the thing. A lot of the problems we’re currently facing are caused by a crisis of confidence. Obama’s address to congress last week was optimistic. Politicians should be talking up the economy. We all know what happened when Wayne Swan said the inflation genie was out of the bottle.

It’s perfectly reasonable for a politician to be optimistic, or positive. Particularly when they’re in opposition. That’s their job.

The other thing is – the representatives featured in the ad are all from the left – the same side as Labor. The fact that Springborg disagrees with these people should be expected – and possibly applauded.

Labor at a state level hasn’t really learned the power of a positive campaign – and the cost of a negative campaign – even after Obama’s victory, and Rudd’s, the electorate is sick of smear campaigns. We want to know what you offer – not what the other guys do.

The ads look nice though. Black is the new black for election advertising.